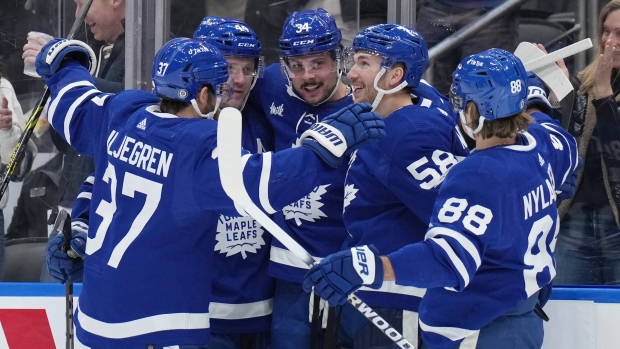 TORONTO - Ilya Samsonov kept his team in the fight early.

The sniper scored twice early in the second period and Samsonov was stellar in making 37 saves as the Toronto Maple Leafs defeated the Winnipeg Jets 4-1 on Thursday night.

“Sammy was dialed in,” Matthews said. “It's a big win for us, but the game could have definitely been a lot closer had it not been for him.”

“Probably the game that's looked closest to him last year in terms of being dangerous, in terms of the way the puck went in the net,” Leafs head coach Sheldon Keefe said of the reigning Hart Trophy winner.

“He could have had four or five tonight.”

Mitch Marner and Mark Giordano, into the empty net, had the other goals for Toronto (28-11-7). Michael Bunting added two assists.

“We stay strong with the focus,” said Samsonov, who was perfect in relief of Matt Murray in Tuesday's 5-4 overtime victory against Florida.

“Two points and we keep on rolling.”

Kyle Connor replied for Winnipeg (29-16-1), which got 23 stops from Connor Hellebuyck.

Jets head coach Rick Bowness was happy with his team's effort coming off Tuesday's 4-1 loss in Montreal, but lamented some crucial errors.

“Played really well,” he said. “The mistakes we made with their best players on the ice were glaring. To me, we gave them the first three goals.

“You give those guys - Matthews and Marner - those chances, they're going to score.”

Winnipeg, which entered as the Western Conference's No. 1 seed, carried much of the play in the first - outshooting Toronto 16-6 in a period where Samsonov had to be on his toes - but the Leafs had the best chance when Matthews pinged a shot off Hellebuyck's crossbar.

“We were on our heels a bit just with their speed,” Keefe said. “Sammy had to be really strong.”

Matthews, who sat out two recent games due to injury and illness, found the range just eight seconds into the middle period when he stepped around Mark Scheifele and beat Hellebuyck five-hole.

“It was good just to reset,” Matthews, with four goals in three games since his return, said of the mini-break. “No secret it's a bit of a grind throughout the season.

“Sometimes a little bit of rest can go a long way.”

The Leafs made it 2-0 less than four minutes later when Winnipeg got caught puck-watching and Bunting found Matthews to rip his 24th of the campaign.

“Auston went out and took charge of the game to start the second,” Keefe said. “That was excellent.”

The Jets went to the power play with less than seven minutes left in the period, but Marner fired his 17th past Hellebuyck on a short-handed 2-on-1 as the winger built on his franchise record by registering at least a point in a 20th straight home game.

Samsonov had to be sharp late in the second as the visitors started to push, including a good pad stop on Connor.

The Russian netminder then denied the Jets' leading scorer on a power play early in the third before Winnipeg went to a two-man advantage that saw Connor finally connect for his 23rd.

Matthews got a nice ovation from the crowd later in the period, not for another offensive outburst, but a shot block with a Toronto defender minus a stick before Giordano iced it into the empty net late.

“Trying to do whatever it takes to win,” Matthews said of his block. “Sometimes the game calls for different things.”

Both he and Samsonov answered the call Thursday.

Philadelphia defenceman Ivan Provorov's boycott of a pre-game Pride celebration earlier this week - citing his religion - continues to be a topic of conversation across the NHL.

“I, personally, believe in equality,” Toronto blue-liner Morgan Rielly said Thursday morning. “This is a place where you can come and participate and feel accepted and safe.”

The 26-year-old, who is Russian Orthodox, said afterwards he respected “everybody's choices.”

Rielly added it was “tough to say” if a player with similar views would be welcomed into Toronto's fold.

“No matter who you are, where you're from, you have an opportunity to be in this room and feel accepted,” he said. “That's how we treat people. We're pretty firm on that.”

The Leafs posted “Love All, Hate None” on the scoreboard before puck drop Thursday.

“Bad look for our game,” said Rielly, who has marched in Toronto's Pride parade. “Another reminder there's lots of work to be done until we get to a spot that we can feel really proud.”

This report by The Canadian Press was first published Jan. 19, 2023.