Matthews scores 40th goal of the season, Leafs use early barrage to down Habs 5-2 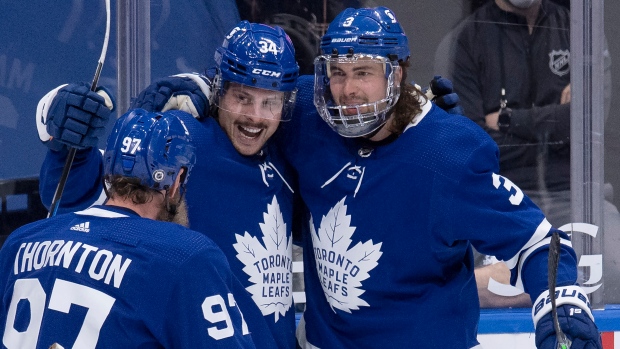 Toronto Maple Leafs centre Auston Matthews (34) celebrates his 40th goal of the season with teammates Joe Thornton (97) and Justin Holl (3) during third period NHL action against the Montreal Canadiens in Toronto on Thursday, May 6, 2021. THE CANADIAN PRESS/Frank Gunn

Creating offence had never been a problem for the Maple Leafs' star sniper. It was everything else about the 23-year-old's game during a tough training camp that stood out to Toronto's head coach.

“He's come in, I think, on a mission,” Keefe said. “He's put in such great work defensively away from the puck that you want to see him reach the goals he has for himself.

“And they're lofty goals, but clearly he keeps setting the bar even higher.”

That continued on a milestone Thursday night.

Matthews scored for a league-leading 40th time in just his 49th game as the North Division-topping Leafs jump on Montreal early in a 5-2 victory over the Canadiens.

“It means a lot,” Matthews said of reaching 40 goals for the third time in his five NHL seasons. “It's a team sport, so there's a lot that goes into it.”

Frank Mahovlich is the only player in franchise history to score 40 goals in fewer games, hitting the mark in 48 contests in 1960-61. Matthews, who tallied 47 in 70 games before the 2019-20 campaign was suspended because of the COVID-19 pandemic, required the fewest games to hit 40 goals since Pavel Bure reached the number in 48 outings back in 1999-00 with the Florida Panthers.

“It's incredible,” Toronto captain John Tavares said. “He makes it look so easy. It's unreal to watch. It's a testament to him and his work ethic.”

With the Leafs leading 4-2 in the third period, Matthews took a feed from Mitch Marner and wired a shot past Jake Allen to extend his goal streak to five games. The No. 1 pick at the 2016 NHL draft also has a personal five-game goal run against Montreal.

Marner and Tavares, with a goal and an assist each, Alex Galchenyuk and Pierre Engvall also scored for Toronto (34-13-6). Jack Campbell made 20 saves, while Jake Muzzin added two assists.

“It's pretty cool,” he said. “It just speaks volumes of how well our team's playing.”

Cole Caufield and Artturi Lehkonen replied for Montreal (24-20-9). Cayden Primeau allowed four goals on 15 shots in the opening 20 minutes before being replaced by Allen, who finished with 19 saves.

The Leafs improved to 6-2-1 against the Canadiens in 2021 after falling 3-2 in overtime at the Bell Centre on Monday.

“They just jumped all over us,” Montreal defenceman Ben Chiarot said. “We were slow out of the gate.”

Montreal had a chance to clinch a post-season spot Thursday, and still trails Winnipeg by two points for third in the division with three games left on its schedule. The Jets, who secured a post-season berth Wednesday, have four home dates left on the docket.

Toronto was minus injured forwards Zach Hyman (knee) and Nick Foligno (upper-body), as well as defenceman Zach Bogosian (shoulder), but got blue-liner Justin Holl (face) back after he missed Monday's loss.

The Leafs opened the scoring just 16 seconds into Thursday when Galchenyuk whipped a backhand from the slot past Primeau for his fifth goal of the season - and first against the team that drafted him third overall in 2012.

Playing the second of a back-to-back following a 5-1 loss in Ottawa, Montreal went down 2-0 at 3:24 when Tavares picked up a rebound to bury his 18th.

Engvall then got in on the action at 10:38 with his fifth as Toronto scored on three of its first eight shots against Montreal's rookie third-string goalie.

“We were flat in front of him,” Chiarot said. “Didn't give him any help.”

Marner continued the onslaught with 2:39 left in the period when the seas parted and he deked around a helpless Primeau before smoothly backhanding home his 19th from below the goal line.

“That's just the guys buzzing,” Campbell said of Toronto's barrage. “Love seeing that ... it gives the team a ton of confidence.”

Allen replaced Primeau to start the second, and the visitors came close to getting one back on an early power play, but Holl cleared a loose puck off Campbell's line.

Toronto appeared to go up 5-0 midway through the period only to have Ilya Mikheyev's one-timer waved off because Stefan Noesen, who was making his Leafs debut, was in Allen's crease.

Montreal finally got on the board with 6:30 left in the period when Caufield scored his third - the rookie bagged the OT winner against Campbell in Montreal on Monday for the second extra-time goal of his young career - after Rasmus Sandin had his pocket picked.

Lehkonen added his sixth on a rebound to make it 4-2 just 3:04 into the third, but Toronto held firm from there before Matthews put things to bed at 15:41.

“We had a real challenging training camp,” Keefe recalled. “When a player of Auston's calibre comes in and is first of all prepared for it, but secondly goes out on the ice and is leading the charge for our group in terms of work ethic and competitiveness, attention to detail, it was very clear he was ready to bring his game to another level.

“He's not going to slow down ... he's just going to keep pushing himself and our team.”

This report by The Canadian Press was first published May 6, 2021.