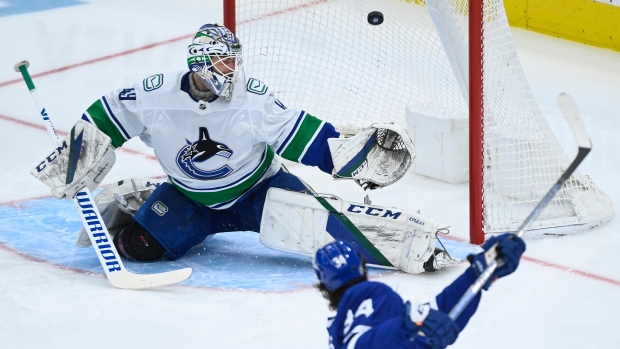 TORONTO - Auston Matthews scored his NHL-leading 36th goal of the season as the Toronto Maple Leafs defeated the Vancouver Canucks 4-1 on Thursday night.

The 23-year-old sniper hit the 60-point mark for a fifth straight season since getting picked first overall at the 2016 draft, and would be on pace to score 64 goals in an 82-game season.

Mitch Marner with a goal and an assist, William Nylander and Pierre Engvall provided the rest of the offence for Toronto (32-13-5). David Rittich, who got the start in place of Jack Campbell, made 15 saves to pick up his first victory since being acquired from the Calgary Flames ahead of the trade deadline.

Jason Spezza added an assist to pass Maurice (Rocket) Richard and sit alone in 99th spot on the league's all-time scoring list with 967 points. The Canucks' 16 shots were the fewest allowed by the Leafs this season, besting the 18 surrendered to Calgary on March 19.

J.T. Miller replied for Vancouver (19-22-3), which has lost four of its last five and remains 10 points back of the Montreal Canadiens for the North Division's fourth and final playoff berth with four games in hand. Braden Holtby made 20 saves.

The Leafs, who have won four straight following a 0-3-2 run, improved to 4-3-1 against the Canucks in 2021. The teams will conclude their nine-game season series Saturday back at Scotiabank Arena.

Vancouver hasn't won in Toronto since December 2011 when Leafs assistant coach Manny Malhotra was in the Canucks' lineup.

The Leafs became the first team in the North to secure a playoff spot when they downed the Canadiens 4-1 in Montreal on Wednesday, which gave head coach Sheldon Keefe the option to rest a number of veterans and add some fresh legs to the lineup.

Hutton debuted for the Leafs following his acquisition from the Anaheim Ducks prior to the deadline, while Liljegren suited up for the first time with the big club in 2021.

After beating Toronto two straight in Vancouver following their COVID-19 outbreak that saw 21 players and four coaches test positive, the Canucks came in having lost three of their last four in regulation to the Ottawa Senators, including Wednesday's 6-3 loss in the nation's capital.

The first period started with a bang as Leafs winger Wayne Simmonds fought Canucks defenceman Alexander Edler in response to the latter's knee-on-knee hit on Zach Hyman in Vancouver on April 18. Edler was suspended two games for the incident, while Hyman was diagnosed with a sprained MCL that was expected to keep him out of the lineup at least two weeks.

The Leafs carried a decided edge in the opening 20 minutes, but just two of their first 16 shot attempts found the mark, including a T.J. Brodie effort off the crossbar.

Toronto finally found the range with 4:31 left in the period when Vancouver defenceman Quinn Hughes couldn't get the puck out of his zone. John Tavares and Alex Galchenyuk quickly got the puck to Nylander, who made no mistake for his 16th goal of the season, and second in as many games.

After bagging his 35th of the season Wednesday, Matthews added another in his relentless pursuit of the Rocket Richard Trophy as the league's top goal scorer when he took a pass from Marner on a 2-on-1 and one-timed a shot past Holtby just 51 seconds into the second.

Vancouver rookie Kole Lind - the 33rd pick the 2017 draft who made his NHL debut - collected his team's third shot of the night shortly thereafter, but Engvall finished off a nice passing play with Spezza and Rasmus Sandin at 2:56 with his fourth to make it 3-0.

The Canucks finally showed some life as the period wore on, and Miller got one back with 4:24 left in the period when the puck ricocheted to the winger on a power play for him to make no mistake by burying his 11th on Rittich, who allowed five goals on 28 shots in an ugly loss to the Vancouver on April 20 in his last appearance.

Matthews attempted a spin-o-rama move early in the third looking to add to his goal total, but Holtby was there to shut the door before doing the same on Tavares on another rush chance.

The Leafs rounded out the scoring with 54.9 seconds left in regulation when Alexander Kerfoot stole the puck from Holtby, who had been on the bench for an extra attacker, and fed Marner for his 18th.

This report by The Canadian Press was first published April 29, 2021.