Matthews scores two more as part of another four-point night, Leafs down Habs 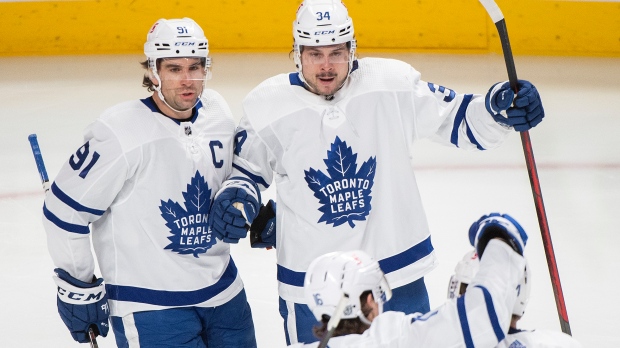 Mitch Marner, with a goal and two assists, Travis Boyd and Alexander Kerfoot provided the rest of the offence for Toronto (14-3-2), which got 30 saves from Frederik Andersen. Morgan Rielly added two assists.

Matthews, who also registered a four-point night in Thursday's 7-3 victory over the Ottawa Senators, has put up that eye-popping goal number in just 18 games - he missed one contest because of a hand injury - with 17 coming in his last 14 contests.

The 23-year-old is also just the sixth player in franchise history to register a point in 16 straight games, two back of record-holders Darryl Sittler and Ed Olczyk.

The Canadiens played for the first time in a week after picking up a much-needed 2-1 road victory over the Leafs last Saturday to snap a 1-3-0 stretch, while Toronto suited up for the fourth time in six nights on the heels of a three-game series with Ottawa that saw the North Division's top seed go 2-0-1.

After the goalies stole the show in the opening 20 minutes, Matthews and the rest of the shooters went to work.

Toronto opened the second period with a 5-on-3 power play, and after the Leafs' No. 1 unit looking disjointed on a couple of zone entries, Matthews took a cross-ice feed from Marner and one-timed his 17th of the campaign at 1:05.

The visitors remained on the man advantage, and Boyd scored third off a pass from Joe Thornton to make it 2-0 just 15 seconds later.

The Canadiens responded when Kotkaniemi snapped an 11-game goal drought with his second on a breakaway, beating Andersen over the blocker at 3:24.

Byron - a Montreal alternate captain put on waivers earlier in the week - then jumped on a Leafs' turnover and moved in alone before backhanding his first over Andersen's glove 33 seconds after that as the teams combined for four goals in 2:52.

Toronto went back in front at 7:31 when Matthews took a hit from Canadiens captain Shea Weber in order to feed Marner, who fired a quick shot past Price for his ninth.

After not dressing in Thursday's victory following 10 straight starts with backup goalie Jack Campbell out with a leg injury, Andersen was at full stretch to rob Jake Evans later in the period off a pass from Byron in the fourth of 10 meetings between the Original Six rivals during the NHL's truncated 56-game season.

Toronto went back on the power play inside the fan-less Bell Centre, with Matthews snapping a shot from distance that fooled Price for his NHL-best 18th goal - and fourth point of the period in his 300th career NHL game - to make it 4-2 at 15:05.

The first overall pick in the 2016 draft has scored twice in three of his last four outings, and has seven goals over that span. Matthews' 16-game point streak includes 18 goals and 10 assists.

The Canadiens appeared to get back within one with 4:31 left in the period when Kotkaniemi jammed the puck over the line on a scramble with Zach Hyman writhing in pain after blocking a shot, but the Leafs correctly challenged for goaltender interference.

Montreal, which now trails Toronto by 10 points in the standings with three games in hand, pushed as the period wore on, but Kerfoot made it 5-2 with his fourth at 13:36 after Jason Spezza's partially blocked shot on a 2-on-1 break fell to him on Price's doorstep.

Matthews had a chance just the third hat trick of his career with the teams playing 4 on 4 late in the third, but Price was there with the glove.

Toffoli got a consolation goal, his 11th, for the home side with 1:26 left in regulation.

The Leafs won the first two meetings of the season between the clubs - 5-4 in overtime on opening night and 4-2 at the Bell Centre on Feb. 10 - before the Canadiens picked up that 2-1 victory in Toronto last weekend.

The goalies stole the show early Saturday, with Andersen stopping Montreal's Josh Anderson on one chance from the slot before also denying Tomas Tatar's breakaway effort in the first. The Leafs netminder then robbed Joel Armia with his blocker on a Canadiens power play.

Price denied William Nylander on a partial break at the other end earlier in the period before outwaiting Ilya Mikheyev and shutting the door in tight as the Toronto winger tried to slip a shot home shortside.

Notes: The Canadiens begin a two-game set in Ottawa against the Senators on Sunday, while the Leafs welcome the Calgary Flames for a pair starting Monday. ... Toronto defenceman Justin Holl played the 100th game of his NHL career. ... Marner has goals in back-to-back outings against Montreal after being shutout in the first 16 games versus the Canadiens.

This report by The Canadian Press was first published Feb. 20, 2021.