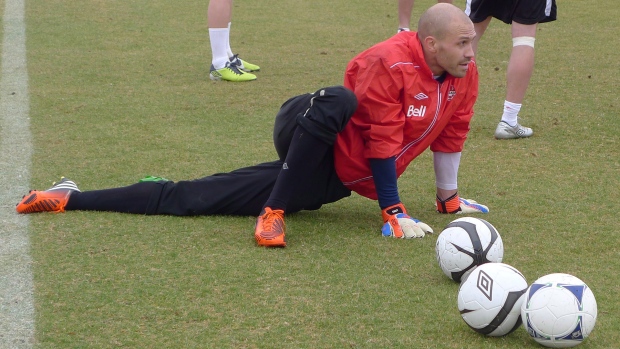 Canadian men's national soccer goalie Lars Hirschfeld stretches during a practice session in Scottsdale, Arizona on Thursday Jan. 24, 2013. The hangover from Canada's 8-1 loss in Honduras lasted through the remnants of Hirschfeld's club season in Norway. THE CANADIAN PRESS/Neil Davidson

Memories of San Pedro Sula are hard to shake.

For members of the Canadian men's team who were there Oct. 16, 2012, for a decisive World Cup qualifying game against Honduras, the 8-1 loss at the Estadio Olimpico Metropolitano is like an ugly, hard-to-remove tattoo.

The lopsided defeat was doubly painful because the Canadians came into the game knowing they only needed a draw to make the final round of CONCACAF qualifying for the first time since the leadup to France '98.

“That was probably our biggest moment to shine. And the complete opposite happened,” said former midfielder Patrice Bernier, who was on the bench that day. “We got stunned. We got humiliated.”

Canada's worst loss since an 8-0 drubbing in Mexico in 1993 was cause for celebration for a sellout crowd of 38,000 on a steamy afternoon in the crumbling stadium.

“You feel like you're in the presence of double the capacity, because it's loud, the people are behind you, they're heckling, using all sorts of words to say how bad we are as players or as human beings,” Bernier said. “(And) supporting their team.”

Canada (4-0-4) returns to the scene of the crime on Thursday for another World Cup qualifier - this time topping the final round of qualifying in the region. Honduras (0-5-3) is at the bottom of the eight-team standings, with both teams having six matches still to go.

Despite the hostile atmosphere in 2012, Canada had early chances to go ahead.

Tosaint Ricketts was unable to get a foot on the ball from in front of goal just after the opening kickoff.

The Hondurans scored in the seventh minute as captain Kevin McKenna and Andre Hainault failed to corral a high, awkward bouncing ball. Jerry Bengtson went through the middle and got a foot to the ball to poke it in.

Simeon Jackson almost tied it up minutes later, but his shot hit the post and goalie Donis Escobar saved the rebound chance from Ricketts.

Bengtson scored again in the 17th minute and Honduras led 4-0 after 33 minutes.

Bernier, now a soccer analyst with TVA and co-owner of Enov Sports which sells soccer training equipment, wonders what might have happened if Canada had gone ahead early, pushing the pressure on the home side which needed a win.

Forward Iain Hume came off the bench to start the second half, scoring a consolation goal off a nice free kick in the 77th minute.

Hume recalls the buildup to the game was “insane because we put a lot of pressure on ourselves. Because we knew what we had to go down there to get.”

The pressure came in part because of missed opportunities to pick up points earlier in the round, most notably in a 0-0 tie with Honduras in Toronto four months earlier.

“If we'd gone down there not needing that point, as our safety net, maybe things would have worked out differently,” added Hume, who now serves as an analyst for OneSoccer and runs Iain Hume Limitless Football and Fitness Coaching. “But then you got a couple of illnesses. We had guys already suspended. We had a couple of guys injured. It started mounting up against us.

“And just driving into the stadium 2 1/2 hours before the game and it's full to the brim. It sort of generated an atmosphere that although we'd been before, we didn't have the added pressure of our position in the group stage. And it just snowballed. It was so massive the pressure that was on us before the game.”

The U.S., Costa Rica and Honduras eventually qualified for Brazil 2014 out of the so-called Hex final round. Mexico beat New Zealand in a playoff to join them.

The decisive San Pedro Sula game was supervised by a FIFA security expert from Europe, called in by Canada after concerns about fan harassment at its hotel in Panama. There were no such problems at the San Pedro Sula hotel, however.

Police with machine-guns were stationed outside the Canadian team's well-appointed digs.

“Players will not doubt enjoy the pool and perhaps the local scenery,” wrote The Canadian Press reporter covering the trip. “On Saturday night, the bar drew a steady stream of beautiful people, The heels were high, as were the skirts.”

But there was menace around the five-star hotel. A bank inside a fashionable nearby mall featured shotgun-wielding security guards on both sides of the entrance.

A guard with a shotgun also manned a nearby gas station. It was the same elsewhere.

The Canadian players remained inside their hotel other than going to the stadium to train and play.

“They're beautiful places but when you're there for a job that we're there for, you are now the enemy,” said Hume. “So the last thing they want to do is allow you to walk around.”

A 2011 study by the United Nations Office on Drugs and Crime titled “Global Study on Homicide” reported that Honduras had the higher per capita murder rate in the world (82.1 per 100,000). In comparison, Canada's rate was 1.8.

The Washington Post, quoting Mexico's non-profit Civic Council on Public Security and Criminal Justice reported in January 2012 that San Pedro Sula the second-biggest city in Honduras, was the world's most violent place in 2011, surpassing the Mexican border city of Ciudad Juarez.

While the San Pedro Sula locals seemed friendly, peering down dilapidated side streets en route to the stadium offered a glimpse into a world few want to experience.

Negotiating the city was memorable, if not always pleasant.

“Nestled in scenic green hills, San Pedro Sula is an adventure in driving,” wrote the CP reporter on the ground. “At night, pedestrians pop out of nowhere. Traffic signs seem to be tolerated, if not adhered to strictly although there is a certain courtesy between drivers. Licence plates seem optional.”

On game day, a handful of police stood along the sidelines, leaning on their riot shields prior to the match as the Canadians came out for their warmup. In the stands, fans stood two or three deep in the aisles.

The press area was part of the stands, with nearby Honduran fans laughing and then perhaps sympathizing with the reporters at work as the lopsided match wore on.

“Disappointing and heartbreaking and everything you could imagine, any word you could put there to be a negative is exactly what the outcome of that game was,” said Hume. “I think It put the writing on the wall for a lot of players' careers, mine included with the national team - because we were always going to be dubbed a part of that day.”

Hume went on to win five more caps, bringing his total to 43. Bernier made three more appearances for Canada, finishing with 56 caps.

In a corridor under the San Pedro Sula stands after the match, Canada coach Stephen Hart refused to make excuses. Reminded that he was not on the field during the debacle, Hart paused and said simply: “But it's my responsibility.”

Hume still regrets that Hart had to fall on his sword “because we'd played some of the best football Canadian soccer had ever seen (to get there) with the team and the squad we had.”

The only starter from that day remaining in the current squad is Atiba Hutchinson, now Canada's captain and all-time caps leader (90). Forward Lucas Cavallini, who was a second-half substitute, and goalkeeper Milan Borjan, who was on the bench in 2012, are also with the current team,