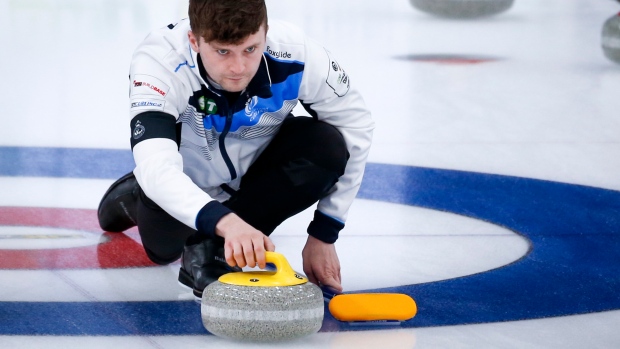 Scotland skip Bruce Mouat, centre, makes a shot against Team Canada in the qualification round at the Men's World Curling Championships in Calgary, Alta., Friday, April 9, 2021.THE CANADIAN PRESS/Jeff McIntosh

CALGARY -- The men's world curling championship playoffs were given the green light to resume Sunday in Calgary after a suspension of games due to COVID-19.

Alberta Health approved the resumption of games, the World Curling Federation said in a statement.

Four participants, including three from non-playoff teams, tested positive for the virus, but did not show symptoms of the illness.

An unidentified athlete from a playoff team who tested positive, and then negative in a subsequent test, was initially barred from competing, but the WCF reversed course and allowed him on the ice Sunday.

"After extensive consultation with Alberta Health the athlete who tested positive, then negative has been granted permission to play in the playoffs today," the WCF said in a statement. "The athlete in question has been fully vaccinated.

"New medical guidelines have been implemented for the closing day. Players will remain masked when competing and PCR throat-swab tests will take place before and after each game."

The United States and Switzerland got on the ice Sunday morning with all players wearing masks.

Adding to the confusion, domestic host broadcaster TSN said it will not carry the game "due to COVID-19 issues" although the game was shown on WCF streaming services.

Saturday's playoff game and a pair of semifinals were postponed while more testing was conducted.

Athletes, coaches and event officials considered close contacts with the infected athletes tested negative, according to the WCF.

Sweden, Russia and Scotland and the playoff winner between the Americans and the Swiss were to play in Sunday afternoon's semifinals.

Gold and bronze-medal games were scheduled for the same draw in the evening.

The men's world championship is the fourth Curling Canada event held in a controlled environment without spectators following the national men's, women's and mixed doubles championship.

A fourth positive test involving a playoff-team athlete wasn't received until Saturday morning, the WCF said. That player subsequently tested negative for the virus in the retesting round.

This report by The Canadian Press was first published April 11, 2021.