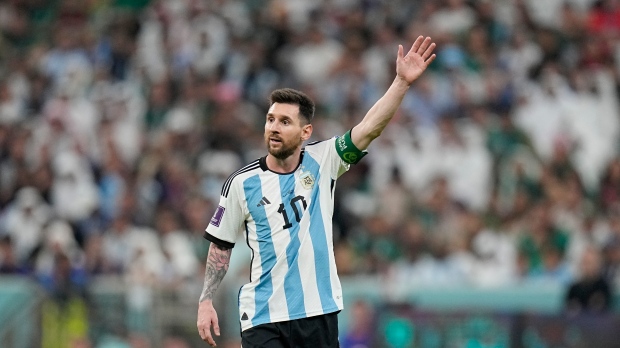 LUSAIL, Qatar (AP) - Lionel Messi was almost in tears as he grabbed and shook his jersey in front of Argentina's celebrating fans, then blew a kiss and looked to the sky.

With one of the most important goals of his career, Messi led Argentina to a 2-0 victory over Mexico on Saturday to ignite his team's World Cup chances.

His dream of winning soccer's biggest prize in likely his last attempt is still alive.

“It's a weight off our shoulders,” Messi said. “It gives us joy and peace of mind to start again.”

Messi took a touch from Angel Di Maria's pass across the face of the area and drove a low shot from 25 meters (yards) into the bottom corner to give Argentina the lead in the 64th minute.

His arms outstretched, he ran toward the team's supporters who were celebrating behind the goal and was soon mobbed by his teammates. He whirled his arms in an emotional response to scoring his 93rd - and perhaps most crucial - international goal.

Substitute Enzo Fernandez added a second goal in the 87th minute, ensuring Argentina bounced back from a 2-1 loss to Saudi Arabia that ranked as one of the World Cup's biggest ever upsets.

“We lived with discomfort and kept the defeat in the opening match in our minds,” Messi said. “The days were very long.

“We were eager to have the chance to turn the situation around and luckily we won.”

Argentina is second in Group C ahead of its last match against first-place Poland on Wednesday, and might need to win it to advance.

“We can't let our guard down now,” Messi said. “All of our matches are finals now. We can't mess up.”

It was an eighth World Cup goal for Messi, the same number scored in the tournament by rival Cristiano Ronaldo and also Diego Maradona - the Argentina great with whom he is so often compared.

For some, Messi needs to win the World Cup - the only major title missing from his collection - to join the ranks of Pele and Maradona as soccer's greatest ever players. Thanks to this win, it could still happen.

“We already know for many years he is the world's best player,” Argentina coach Lionel Scaloni said. “Messi should enjoy this World Cup. All fans enjoy seeing him play.”

Scaloni made five changes from the Saudi Arabia game in a bid to inject some more energy into the team but initially they made little difference in what proved to be a tense game lacking in quality. Argentina's build-up play was slow and Mexico had little problem snuffing out its opponent's attacks.

Messi was often seen walking around the field and mostly found himself with two defenders on him each time he got the ball. Frustration was starting to show on his face before the first half had even finished as he implored his teammates to relax.

Indeed, the goal Messi scored came from one of the first times he found himself in space.

Argentina's fans inside the 89,000-seat Lusail Stadium hugged each other. Some cried. Argentina defender Lisandro Martinez fell to the ground and appeared to bury his face in the turf.

“I don't think during the match he found many spaces in the last third of the field,” Mexico coach Gerardo Martinez, an Argentine who led his native country from 2014-16, said of Messi. “But he only needs a few seconds to be the difference.”

The momentum of the game changed completely and Mexico suddenly became ragged, with substitute striker Julian Alvarez proving much more effective for Argentina than Lautaro Martinez, the player he replaced.

Fernandez's goal was his first for Argentina and it was an excellent one. He feigned to go to his left before shifting the ball to his right foot and curling a shot high and beyond Mexico goalkeeper Guillermo Ochoa.

Argentina's substitutes poured onto the field to join the celebrations at the same stadium where there was so much despair after the shocking loss to Saudi Arabia.

“We knew we had to win today, that another World Cup was starting for us,” Messi said, “and we knew how to do it.”

Mexico midfielder Andres Guardardo became the sixth male player to feature at five World Cups. The 36-year-old follows two Mexicans - Antonio Carbajal and Rafa Marquez - as well as Lothar Matthaus, Cristiano Ronaldo and Messi. Guardardo didn't last the first half, coming off in the 42nd minute because of injury.

Poland leads Argentina and Saudi Arabia by one point with one match to play. Mexico is last and will next face the Saudis.