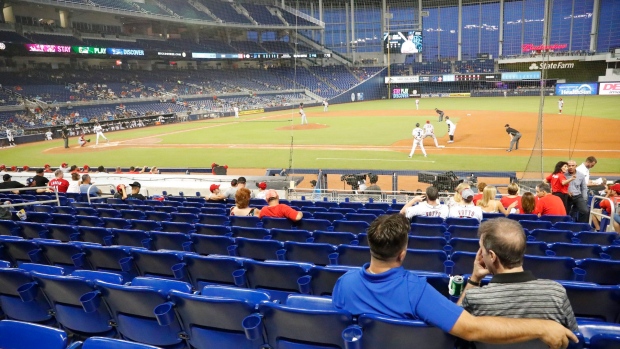 In this Monday, Aug. 26, 2019 file photo, Fans watch play among empty seats during the second inning of a baseball game between the Miami Marlins and the Cincinnati Reds in Miami. (AP Photo/Wilfredo Lee, File)

MIAMI -- The Miami Marlins will join Major League Baseball's trend toward artificial turf by installing the surface at Marlins Park for 2020, and they'll move in the fences for the second time in four years.

CEO Derek Jeter said an artificial surface solves the challenge the Marlins have had growing grass in the retractable-roof stadium since it opened in 2012. They'll install the same turf used by the Arizona Diamondbacks and Texas Rangers.

Five of the 30 teams in the majors now will have artificial turf. Arizona added it this year, joining Toronto and Tampa Bay. Texas' new ballpark opens in 2020.

"While playing the Diamondbacks in Arizona, we were able to get a close look and examine the new surface at Chase Field," Marlins president of baseball operations Michael Hill said on a team website. "We agreed as an organization that this change was for the best after our players and staff had encouraging remarks regarding the playability of the playing surface."

The Marlins also plan to move in their fence in centre and right-centre field. The distances are changing from 407 to 400 feet in centre and from 399 to 387 in right.

The distances "will now be more in line with the field dimensions you see across many of today's ballparks," Jeter said.

Since it opened, Marlins Park has had a reputation for being pitcher-friendly. This year the stadium had the third-lowest home run rate in the majors.