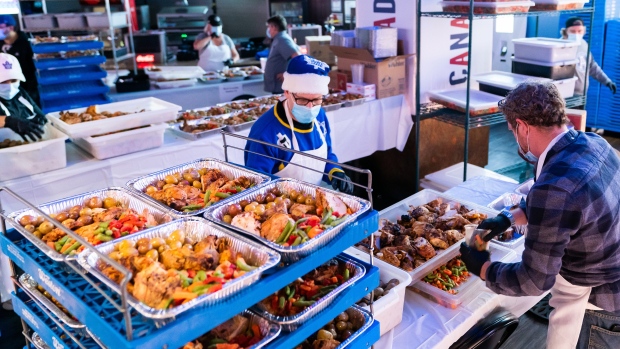 Maple Leaf Sports and Entertainment chefs prepare meals at the Scotiabank Arena in this undated handout photo. Maple Leaf Sports and Entertainment's giant kitchen is open again. MLSE and its partners, who combined to donate 500,000 meals to front-line workers and community agencies from April to June, are reintroducing the 'Bringing Toronto Back to its Feet" program. THE CANADIAN PRESS/HO, MLSE, Thomas Skrlj

MLSE and its partners, who combined to donate 500,000 meals to front-line workers and community agencies from April to June, are reintroducing the 'Bringing Toronto Back to its Feet“ program.

Starting this week, the goal is to distribute more than 130,000 meals in early December.

Scotiabank Arena will again be used to assemble the meals, which can be stored and frozen. They will later be distributed to community agencies and families who are struggling. MLSE's chefs and food and beverage staff, along with other company employees, will prepare the meals for distribution.

MLSE chairman Larry Tanenbaum. calls this holiday season “one of the most challenging that we have known.”

“This program will play a small part in helping our neighbours enjoy their holiday season as we all look forward to a better year ahead in 2021,” he said in a statement.

Solidarity Kitchens, created by La Tablee des Chefs and financially supported by the Agriculture and Agri-Food Canada emergency fund, has given grants to Canadian initiatives, including Bringing Toronto Back To Its Feet, with a goal of creating two million meals for those in need across the country.

“As the pandemic continues to impact our communities and we approach the holiday season, there is no better time to come together to support those in need and we want to thank everyone who is helping to make a return of this important program possible, including MLSE's ownership group and our founding corporate partners,” said MLSE president and CEO Michael Friisdahl.

Second Harvest, the largest food rescue organization in Canada, along with a network of local suppliers and sponsors, are supplying fresh ingredients daily to the MLSE team.

The chefs will then turn those supplies, along with other food purchased or donated to the program, into ready-to-heat meals meeting a variety of dietary needs. The meals will delivered five days a week.

The meal donation program sees MLSE chefs spread out in Scotiabank Arena kitchens, physically distanced as they cook using giant 120-litre pots. Routes have been set up in the arena to control the flow of traffic and food, from the loading dock to kitchen to meal assembly line.

The chefs stay in the kitchen. Others take the food from the kitchen to an open space in the arena to be assembled and packaged into meals. Earlier this year, that was the arena floor. This time, the meals are being put together in the concourse.

Once cooked, the food is cooled in fridges, then assembled quickly and covered, wrapped and refrigerated again to await distribution and reheating.

At its peak, the MLSE-led program produced 13,000 meals per day, providing meals to more than 75 community agencies and front-line health-care workers and their families at 25 hospitals and health-care facilities in the Greater Toronto Area.

“We have heard first-hand about the incredible impact these prepared meals have on the lives of people struggling with hunger and limited access to food programs,” said Lori Nikkel, CEO of Second Harvest.

MLSE is working with food hygiene experts and Toronto Public Health to ensure the safety of the meals and of the people preparing them.

This report by The Canadian Press was first published Dec. 3, 2020