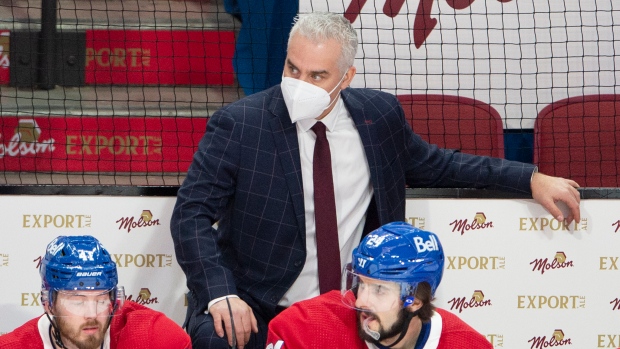 The NHL announced the positive test Friday afternoon, hours before puck drop at the Bell Centre.

The league said in a statement it learned Friday that Ducharme had a presumptive positive result from a test done in Las Vegas on Thursday, one day after the Canadiens' Game 2 victory.

That result was confirmed with further testing.

The NHL said all tests administered to players, other coaches and hockey staff both Thursday and Friday returned negative results.

Luke Richardson will run the Canadiens' bench in Game 3, while fellow assistants Alexandre Burrows and Sean Burke will also be behind the bench.

Deputy commissioner Bill Daly said in an email to The Canadian Press that based on the information the league received, the game was never in danger of being postponed.

Canadiens general manager Marc Bergevin said in news conference about two hours before Game 3 that Ducharme was “doing fine” at home. He added the team is in contact with public health and the NHL.

Asked how long Ducharme might be sidelined, Bergevin said: “It's an ongoing situation, so I can't tell you how long.”

“He prepared the game plan,” Bergevin said. “He's at home, but he's implicated with everything that's going to happen and the game plan for now.”

The Canadiens and Golden Knights were tied at 1-1 in their best-of-seven NHL semifinal showdown after Montreal earned a split in Vegas.

The series is the first cross-border matchup in the NHL this season, made possible by a federal exemption allowing teams to bypass Canada's 14-day quarantine requirements.

The Ducharme news came hours after Prime Minister Justin Trudeau said travel restrictions at the Canada-U.S. border will remain in place for at least another month to prevent a fourth wave of COVID-19.

Dr. Theresa Tam, Canada's chief public health officer, was asked about Ducharme's situation at the House of Commons health committee before the positive test was confirmed.

She said that while the country is fortunate to have vaccines available, none are 100 per cent effective, even with two doses.

“If a vaccine is 80 per cent effective, you might still get a fifth of the population, even after vaccination ... susceptible to infection,” she said. “But what we do know is in general these infections are going to be milder. So the prevention of serious outcomes is also very key.”

“Sports teams have to have protocols,” she added. “So at this time, these type of games are performed under the auspices of public-health departments that have safety plans in place so that should someone become positive, they don't spread that virus to a lot of other people.”

Ducharme was promoted to the interim post from an assistant's role after Claude Julien was fired Feb. 24.

The Canadiens finished fourth in the all-Canadian North Division under Ducharme before pulling off upsets of the Toronto Maple Leafs and Winnipeg Jets in the first two rounds of the playoffs.

The Canadiens had four games postponed in March after two players were placed on the NHL's COVID-19 protocol list.

Richardson has never been a head coach in the NHL, but led the American Hockey League's Binghamton Senators from 2012 to 2016. A veteran of nearly 1,500 NHL games, the 52-year-old former defenceman is in his third season as an assistant with the Canadiens.

Friday's positive test marks the second time in as many post-season appearances Montreal will have to do without its head coach.

Julien was rushed to hospital and had a stent installed in a coronary artery during last summer's playoff bubble in Toronto. Associate coach Kirk Muller filled Julien's role for the remainder of the post-season before Montreal was eliminated by the Philadelphia Flyers.

Julien was back on the job at training camp ahead of the pandemic-shortened 2020-21 campaign, but, along with Muller, was handed his walking papers with the Canadiens struggling to find traction.

This is the second time in the post-season a Vegas opponent has had a coaching question mark related to COVID-19.

Colorado's Jared Bednar missed the team's morning skate ahead of Game 6 in the second round because of irregularities in his testing result. He was cleared later that day and coached the Avalanche in a 6-3 loss that ended their playoff hopes.

- With files from Alexis Belanger-Champagne.