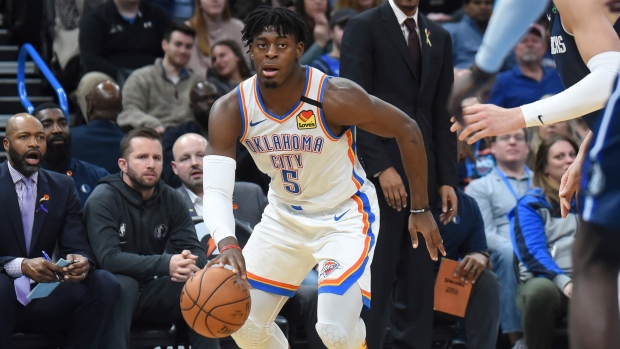 Oklahoma City Thunder guard Luguentz Dort was given a thankless assignment in his first NBA start -- find a way to slow down James Harden.

Taking on the NBA's leading scorer is a daunting task for any defender, let alone a rookie guard on a two-way contract. But Dort's dogged coverage of Harden was a huge part of Oklahoma City's 112-107 win at Houston on Jan. 20.

Harden managed to score 29 points, but over half of those came from the free-throw line as he was held to an uncharacteristically low 9-for-29 shooting performance from the floor, including an abysmal 1-of-17 from the three point line.

According to NBA.com, Dort was the primary defender on Harden for almost eight minutes in the game, and the Rockets star shot 3-for-14 overall and 1-for 11 from three over that span. But the rookie's most impactful play came late in the game with the Thunder trailing 105-104, when he got around a screen and took a charge from Harden, drawing an offensive foul. Fellow Canadian Shai Gilgeous-Alexander followed with a dunk to give Oklahoma City a lead it would not relinquish.

"I thought Lu did an unbelievable job," Thunder coach Billy Donovan told reporters after the game. "He played a lot of minutes, really worked hard on Harden. You're not going to be perfect on him all the time, but I thought the effort that he gave for the 30-plus minutes that he was on the floor was huge for us."

Dort, a six-foot-three, 215-pound Montreal native, has come a long way in a short time since going undrafted in 2019 -- a surprise after being named Pac-12 freshman of the year following a strong season at Arizona State.

He's become an effective foil for Gilgeous-Alexander, the guard from Hamilton who has become the face of the Thunder's rapid rebuild. While the six-foot-five, 181-pound Gilgeous-Alexander is lanky and graceful, the 6-3, 215-pound Dort uses his linebacker-like physique to bully opponents.

While he has a limited offensive presence so far in his NBA career, especially when compared to a creative scorer like Gilgeous-Alexander, Dort has already shown he has the ability to be an elite NBA defender.

The win over the Rockets is hardly an outlier. Beginning with the win in Houston, Dort has started five games in a row for Oklahoma City, with the Thunder winning four in a row before a 107-97 loss to Dallas on Monday. That run includes clampdown performances by Dort against Orlando veteran Evan Fournier (1-for-3 and a turnover in five minutes) and all-star Atlanta guard Trae Young (1-for-5 and one turnover in three minutes).

He also had the primary defensive assignment against dangerous Minnesota forward Andrew Wiggins in a road game Saturday against the Timberwolves. Wiggins did manage to go 4-of-7 from three in the 6:50 he was defended by Dort, the rookie picked up two steals against the native of Vaughan, Ont., and held him to zero assists.

Dort also showed some offensive flair against Minnesota, scoring a career-high 10 points on 3-for-5 shooting, including 2-of-4 from three. The 20-year-old's performance caught the notice of grizzled Thunder guard Chris Paul.

"Lu Dort, you can't tell me that he's a rookie," Paul said after the game. "He did great."

The Thunder will eventually have to make a decision on whether to sign Dort to a full NBA deal, and his high-calibre defence along with the absences of Abdel Nader (ankle), Terrance Ferguson (personal) and Andre Roberson (knee) may force the issue. Dort is allowed 45 days in the NBA on his two-way contract, with the rest of the time spent in the developmental G League.

DYNAMIC DUO -- The Thunder aren't the only team with two effective Canadians on their roster. Dillon Brooks of Mississauga, Ont., and Vancouver's Brandon Clarke have impressed lately for the Memphis Grizzlies. Brooks was averaging 20.6 points per game in January heading into a contest against Denver on Tuesday night. He has at least 20 points in five of his last six games. Clarke is averaging an impressive 12.1 points, mostly off the bench, in his rookie campaign and hit double figures in both Memphis wins to end last week.

30 ROCK -- Wiggins scored 36 points in the Timberwolves' 133-129 overtime loss to Sacramento on Monday. With that effort, Wiggins moved past Hall of Famer Steve Nash for most career 30-point games with 40. Wiggins has scored at least 22 points in each of Minnesota's last four games. It hasn't helped in the standings, as the Timberwolves have lost 10 straight and entered Tuesday's games sitting in second-last place in the Western Conference.

CHECKING IN -- Toronto big man Chris Boucher impressed while the Raptors went through a lengthy short-handed phase, but has seen his minutes evaporate now that his team is boasting a healthy roster. Boucher, form Montreal, has played eight total minutes over Toronto's last seven games heading into Tuesday night's action. ... Miami centre Kelly Olynyk of Kamloops, B.C., tied his season high of 19 points and added nine rebounds in the Heat's 122-117 loss to the Los Angeles Clippers on Friday. ... Saskatoon's Trey Lyles has 10 points and eight rebounds in 26 minutes for San Antonio in a 110-109 loss to Chicago on Monday. ... Cleveland centre Tristan Thompson of Brampton, Ont., had 17 points on 7-of-8 shooting and added 11 rebounds in the Cavaliers' 115-100 win at Detroit on Monday.

KEEP AN EYE ON -- Gilgeous-Alexander, Dort and the Thunder visit the Phoenix Suns on Friday. It will be interesting to see if Dort is tasked with shutting down Suns star Devin Booker.

CanaDunks, a weekly notebook on Canadians in the NBA, is published every Tuesday.