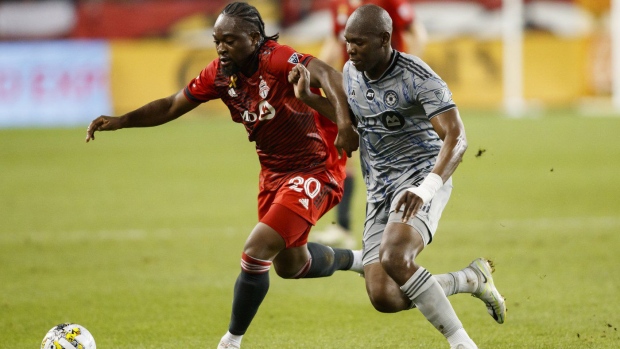 Toronto FC has found a new lease on life thanks to the arrival of Italians Federico Bernardeschi, Lorenzo Insigne and Domenico Criscito. But TFC remains a work in progress, prone to costly blunders.

That was on show this week with points lost at home in a 2-2 mid-week draw with the Los Angeles Galaxy, after conceding an 89th-minute goal, and a painful 4-3 loss Sunday to CF

“The way that we give away goals in this last stretch has hurt us,” said Toronto captain Michael Bradley.

CF Montreal rallied with four straight goals after going down 2-0 after just seven minutes, dealing TFC a body blow in its bid to make the MLS playoffs.

There was a wild start to the game with Toronto scoring in the fifth and seventh minute, only to have Montreal respond with goals in the 19th and 21st. Only three matches in league history have seen both teams score multiple goals faster, according to Stats Perform, a sports data and analytics company.

Montreal pulled ahead in the 43rd minute and added to its lead early in the second half.

Kamal Miller, Djorde Mihailovic, Kei Kamara and Alistair Johnston scored for Montreal, which led 3-2 after a first half that saw the teams combine for seven shots - and score on five of them.

Montreal becomes the first MLS team to erase a two-goal deficit and lead at halftime since Toronto did it against NYCFC in July 2015.

“Today I didn't have the chance to try to push them to come back. They did it by themselves,” said Montreal coach Wilfried Nancy. “This is why we are here today.”

Insigne, with two goals, and Bernadeschi replied for Toronto. Insigne's second came in the 93rd minute with the Italian taking advantage of a Montreal turnover and slicing into the penalty box before chipping the ball over goalkeeper James Pantemis for his sixth goal in nine games.

Montreal, one of the league's best road teams with a 9-4-2 away record, also extended its franchise-record road win streak to five games. Montreal's nine wins, 29 goals and 29 points away from home are also new club marks.

Time is running out for Toronto, which has just four matches remaining. And three of those are on the road - at Atlanta, Orlando and Philadelphia. TFC is 2-8-4 away from home this season.

The lone remaining home game is Sept. 30 against Inter Miami.

There was action from the get-go Sunday with Toronto scoring on its first two shots.

It started with Ayo Akinola appealing for a penalty in the second minute when he went down in contact with Samuel Piette. Referee Allen Chapman initially waved the play off but changed his mind after reviewing the play on the sideline monitor.

Bernadeschi converted the spot kick in the fifth minute for his seventh MLS goal - and fourth from the penalty spot - in nine games.

Bernardeschi becomes just the third player in league history to score in his first five home matches in the league. Joe-Max Moore and Mamadou Diallo each scored in their first six home outings.

Bernardeschi (seven goals and three assists), Insigne (six goals, two assists) and fellow Italian Domenico Criscito (one goal) have been involved in 17 of Toronto's last 20 goals in MLS action, including 11 of the last 12.

Miller pulled one back in the 19th minute, banging home a rebound conceded by Alex Bono off a Kamara shot. Toronto will rue the ease with which Montreal moved the ball after a short corner.

Two minutes later, Toronto was caught napping on a quickly taken free kick at midfield. The ball went to Mihailovic who surged up the field unchallenged before smashing a swerving shot from outside the penalty box that Bono only got a piece of. It was the eighth of the season for Mihailovic, a U.S. international who is set to join AZ Alkmaar in the Dutch top flight in January.

Asked if the team had been getting the kind of goalkeeping it needs Toronto coach Bob Bradley did not mince words.

“Not in this last stretch,” he said.

Montreal's Victor Wanyama spared Bono's blushes in the 29th minute when the Toronto goalkeeper failed to corral a Mihailovic free kick. The ball went to Wanyama who, facing a gaping goal, sent his header over the crossbar.

The tables were turned in the 31st minute when Wanyama, flubbing an attempt to chest the ball to his goalkeeper, the ball instead went to Akinola, who squibbed his shot wide.

A Kamara goal for Montreal in the 34th minute, triggered by a fine Mihailovic cross, was called back for a Romell Quioto foul on a TFC defender.

Things went from bad to worse in the 43rd minute when Joel Waterman's long-distance pass found Kamara, who took advantage of sloppy defending by Chris Mavinga to retrieve the ball, head it toward goal and slip the ball between Bono's legs. It was the 38-year-old Kamara's 136th career goal, third on the league's all-time scoring list (behind Landon Donovan's 145 and Chris Wondolowski's 171).

Insigne just missed with a free kick in first-half stoppage time, watching the ball deflect off the bottom of the goalpost.

Bob Bradley made two changes at the half. Midfielder Mark-Anthony Kaye, who has missed the seven previous games due to a lower body injury, and Doneil Henry came in for Jayden Nelson and Mavinga.

The changes didn't help with Johnston making it 4-2 in the 54th minute, heading home Kamara's cross after Montreal moved the ball from side to side with TFC defenders always second-best.

Toronto had chances in the second half but couldn't convert, with an errant Kaye header perhaps the best opportunity.

Montreal was coming off a 1-0 mid-week loss to the visiting New York Red Bulls. Before that defeat, Montreal had gone unbeaten in eight games (6-0-2) - a run that started with a 1-0 win over visiting Toronto and featured four clean sheets.

Toronto has been resurgent since the midseason arrival of Insigne, Bernardeschi and Criscito. TFC had lost just one of eight games (4-1-3) since Insigne and Bernardeschi made their MLS debuts July 23 in a 4-0 win over visiting Charlotte, before the tie against the Galaxy.

Bradley made two changes to his starting lineup with Shane O'Neil and Noble Okello coming in for Lukas MacNaughton and Kosi Thompson. For Okello, it was his first start since March 12, the third game of the season. He saw 29 minutes of action off the bench mid-week in his return from a long injury layoff.

Montreal had six Canadians in its starting 11, compared to four for Toronto.

This report by The Canadian Press was first published Sept. 4, 2022