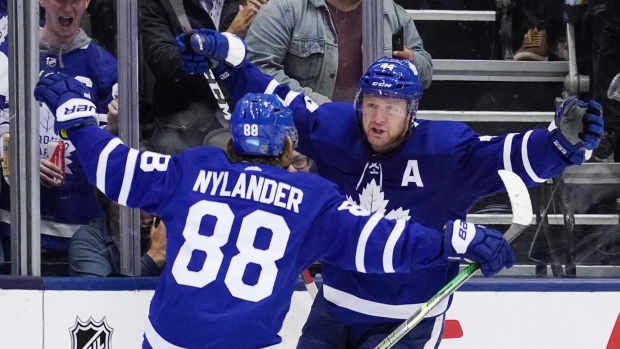 TORONTO - Morgan Rielly has been working out at home trying to stay in shape.

The Toronto Maple Leafs defenceman is also reading, watching movies and improving his rudimentary cooking skills. He's fairly confident with the barbecue and has a decent handle on pasta.

“I don't have the confidence yet for fish,” Rielly said. “I don't want to under-cook it ... then we've got a whole other situation on our hands.”

And when there's quiet moments - there's been, quite frankly, a lot of those - he's reflected on Toronto's rollercoaster campaign that screeched to a halt when the NHL suspended its season March 12 because of the COVID-19 pandemic.

A few weeks before the pause, Leafs general manager Kyle Dubas used the words “Jekyll and Hyde” to describe his team.

On some nights, they were world-beaters with a high-flying roster consisting of Auston Matthews, Mitch Marner and William Nylander up front, Rielly leading from the back end, and Frederik Andersen in goal.

Toronto went 15-4-1 after Sheldon Keefe replaced the fired Mike Babcock as head coach in November and could seemingly almost do no wrong.

And then there were times following that somewhat expected surge when basic breakouts or defensive zone coverages looked like advanced algebra.

Rielly sat out 23 games with a broken foot he suffered blocking a shot in Florida on Jan. 12 in an 8-4 loss - one of many low points in the New Year.

He then watched emergency backup goalie David Ayres become an international celebrity when the Carolina Hurricanes embarrassed Toronto 6-3 at home on Feb. 22, and was on the road to witness the Leafs gain a solitary point against the San Jose Sharks, Los Angeles Kings and Anaheim Ducks - who just happen to be the three worst teams in the Western Conference.

Despite having a lot of information, Rielly still has few answers.

“I can't really put my finger on it,” he said on a conference call with reporters Thursday. “It's important that we use this down time to really take a look in the mirror. As players, we all have to be better.

“If you look at the ups and the downs, that's obviously not how you want your year to be described.”

Rielly returned to the lineup two days before the novel coronavirus outbreak forced the NHL's hand, playing more than 21 minutes in a gritty 2-1 victory over the Tampa Bay Lightning.

The Leafs, who were 36-25-9 and in a post-season spot at the time the league went on hiatus, seemed to play up or down to the opposition's level throughout 2019-20, which is a problem for a team that once again started training camp with Stanley Cup aspirations.

“You want it to be a bit more consistent,” Rielly said. “But with the bad there's always good. We answered the bell at times when we had to against some pretty good teams. And then the downs being the games where you're supposed to win or you really expect a good team to be able to win, and we weren't able to execute.

“Deep inside, you have to take it personally.”

On that personal side, 26-year-old wasn't all that pleased with his play before getting cut down by injury.

He led all Toronto defencemen three goals and 27 points in 46 games, averaging a team-high 24:15 of ice time per night.

But due to an unspecified physical ailment and some inconsistent performances, there were stretches where he looked like a shadow of the player who set career-highs with 20 goals, 52 assists and 72 points in 2018-19. Those 20 goals were the most among NHL defenceman last season, while the points total ranked third overall and fifth all-time for a Toronto blue-liner.

“That's a bit how we as a team look back at the year.”

And even though it was brief, he's thankful to have seen at least a little action after working so hard rehabbing his foot.

“When you're training in the gym and trying to get back to play, you're picturing playing 12, 13 games and playing in playoffs, not playing one (game),” Rielly said. “I'm happy I played one because I think I'd be going crazy if I hadn't played since January.”

Rielly flew home to North Vancouver, B.C., after the NHL allowed players to relocate away from their team's cities last month, and is spending time with girlfriend and Olympic figure skating champion Tessa Virtue in self-isolation.

“We're both in it together,” said Rielly, who's usually loathe to discuss himself in public. “We're trying to keep each other sane and we're doing what we can to do our part and just quarantine ... I'm glad I'm not alone because I think that can be challenging.

“It's important to keep in touch with those people in your life.”

Among the many phone conversations he's had since the pandemic changed life as he and the rest of us know it are chats with teammates about a season that may never end - the NHL could return later in the spring or summer, or perhaps not until the 2020-21 campaign in the fall - and process how it played out.

“You reflect and you picture things going differently,” Rielly said. “This is a really good opportunity for players to do some thinking.”

And hopefully find a solution for whenever the games eventually return.