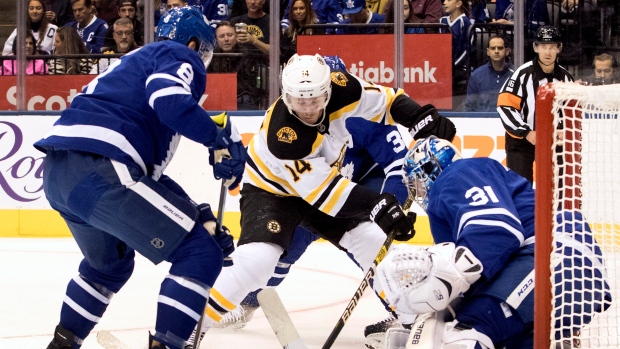 TORONTO - Morgan Rielly scored his second goal of the game at 3:54 of overtime as the Toronto Maple Leafs defeated the Boston Bruins 4-3 on Saturday night.

David Pastrnak, with a goal and an assist, Jake DeBrusk and Danton Heinen replied for Boston (5-1-2), which got 25 stops from Jaroslav Halak.

Rielly's winner came after Marner's shot after taking a pass from Auston Matthews glanced off the Leafs defenceman in front of Halak with the teams playing 3-on-3 in the extra period.

Down 2-1 despite a dominating second, the Bruins tied the score at 1:36 of the third just as a Leafs' penalty was about to expire when Heinen wired his first upstairs on Andersen.

But Toronto replied just 61 seconds later when Kerfoot backhanded a loose puck past Halak for his third of the season.

Andersen faced 33 shots through two periods, and the Boston kept coming late in the third, with Pastrnak tying things with 4:26 left in regulation when he blasted a one-timer for his ninth.

Pastrnak now has nine goals on the season, including seven in the last three games, which puts him in a tie with Edmonton's James Neal for the NHL lead.

The Leafs played their first game without captain and star centre John Tavares, who suffered a broken finger Wednesday and will miss at least two weeks of action. The Bruins, meanwhile, were minus veteran centre David Krejci (upper-body injury) for a third straight game.

Toronto has lost to Boston to open the playoffs each of the last two springs - both series went the distance - but with Tavares, Zach Hyman (knee) and Travis Dermott (shoulder) all out injured, and some major roster restructuring in the off-season, just nine of the 18 skaters dressed for the Leafs in Game 7 back on April 23 were in Saturday's lineup.

The Bruins, who went onto make the Stanley Cup final before losing on home ice in Game 7 against the St. Louis Blues, dressed 13 skaters from that 5-1 victory against the Leafs.

Toronto head coach Mike Babcock threw an early curveball with Tavares out after going through Friday's practice and Saturday's warmup with Matthews centring William Nylander and Andreas Johnsson, and Alexander Kerfoot between Marner and Ilya Mikheyev.

Babcock instead started with Matthews-Marner-Johnsson and Kerfoot-Nylander-Mikheyev, and tinkered with his top-6 at times throughout the night.

Toronto and Boston will play the rematch at TD Garden on Tuesday, but the Leafs have to first worry about Monday's visit from the Columbus Blue Jackets.

The home side opened the scoring at 5:55 of Saturday's spirited opening period when his point shot with Johnsson battling in front went in off Bruins defenceman Brandon Carlo.

DeBrusk came close to tying the game a few minutes later when he blew past Tyson Barrie, but Andersen made a nice toe save.

Timashov made it 2-0 on a good fourth-line shift from Toronto. The rookie winger got the puck from Frederik Gauthier and moved into the slot before roofing his first-career goal past Halak.

The Bruins, who had 18 shots in the first, finally got on the board with 20.6 seconds left in the period when DeBrusk took advantage of some poor Leafs' defending to beat Andersen from in close.

Coming off Thursday's 4-3 shootout lost at home to the Tampa Bay Lightning, Boston fed off that goal in the second and had Toronto on its heels for long stretches.

Patrice Bergeron and DeBrusk missed what looked like a sure goals on tap-ins at the side of the net. Bergeron and Marchand were then both denied on a power play by Andersen, whose team was 1-3-0 against the Bruins during the 2018-19 regular season.

David Backes ran over Andersen to draw the Bruins' first penalty of the night late in the period, but Leafs defenceman Martin Marincin went off for roughing in the ensuing scrum to even it up.

The Leafs' best chance of the second came after Sean Kuraly threw the puck in front of his own net, but Barrie was robbed by Halak with the glove.

The Bruins' top line of Bergeron, Marchand and Pastrnak had combined to score 14 of Boston's 19 goals heading into Saturday.

Canadian tennis star Bianca Andreescu drops the ceremonial puck prior to the start of NHL hockey action between the Toronto Maple Leafs and the Boston Bruins, in Toronto, Saturday, Oct. 19, 2019. THE CANADIAN PRESS/Fred Thornhill