Mrazek injury, cap squeeze force Leafs to dress U of T goalie as backup against Sens 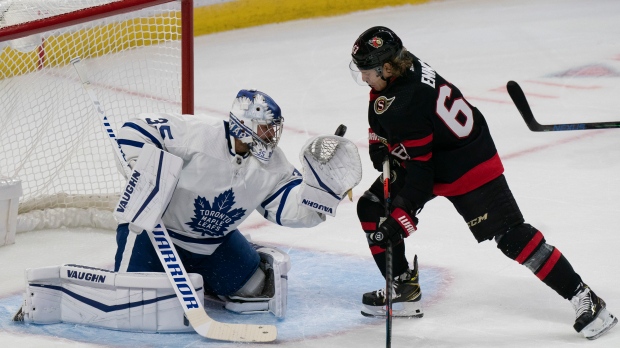 TORONTO - Alex Bishop is set to live out his dream.

The Maple Leafs have their fingers crossed the University of Toronto goalie doesn't move from the end of the bench.

Bishop will dress as backup to starter Jack Campbell on Saturday night against the Ottawa Senators.

Petr Mrazek is sidelined because of a groin injury, and the team is facing a salary cap squeeze as a result.

The situation is compounded by defenceman Justin Holl being unavailable to play due to illness.

Toronto could have sent a player that doesn't require waivers to the American Hockey League and recalled goaltender Michael Hutchinson - the club's third option last season - as the No. 2 behind Campbell, if Holl was healthy.

The organization instead signed the 24-year-old Bishop of Richmond Hill, Ont., with his three seasons of Quebec Major Junior Hockey League experience, to an amateur tryout and hopes Campbell gets through the evening unscathed.

“There's a lot of things that, to be honest, aren't my department, and I'm not really aware,” was Leafs head coach Sheldon Keefe's attempt to explain the rationale.

“But really it just comes down to the fact that the flat (salary) cap has created some situations here that are a lot more difficult to manage even than they were a year ago when they had the taxi squad and a third goalie.

“We're going through that here now.”

Holl has cold symptoms and test results for COVID-19 had yet to come back as of Saturday morning, Keefe said, but even if they're negative, Holl wasn't well enough to suit up against the Senators.

The good news for the Leafs, who are tight to the cap, is Mrazek continues to be evaluated for a groin problem suffered in Thursday's 3-2 loss to the Senators in the nation's capital.

Since Mrazek wasn't placed on injured reserve - a move that would have freed up cap space to recall Hutchison - it points to Toronto's optimism Mrazek's ailment isn't serious.

“That's the situation,” Keefe said. “A lot of teams have already gone through it last season and I suspect a lot more will this season with the rules going back to normal and not necessarily having the COVID exemptions.

The Leafs have recent experience with strange goaltending moments.

They were the opponent when two Carolina goalies, including Mrazek, were injured on a Saturday night in Toronto on Feb. 22, 2020.

The-then-42-year-old Zamboni driver allowed goals on the Leafs' first two shots after entering the fray that memorable night, but Ayres stopped the next eight in a stunning 6-3 Hurricanes' victory that catapulted him into the public eye.

Toronto defenceman T.J. Brodie said he can't imagine the thoughts going through Bishop's head when he got the call.

“I'm sure the nerves are probably going,” he said. “But it's exciting.”

“Whether you're a coach or a player, you don't give much thought to the backup goaltender,” Keefe said. “It has nothing to do with what we're trying to focus on.”

“To be honest, I haven't even spoken to him yet,” he said when asked about his temporary teammate's demeanour. “I just saw him on the ice, and I didn't score any on him, so he looked pretty good.”

The Varsity Blues don't start their 2021-22 regular season until next month.

“It's a quick turnaround,” Kerfoot said. “It's an unfortunate situation, but it's a good opportunity for him.

“We're fortunate to have him here. It's just about enjoying the experience and relishing it.”

This report by The Canadian Press was first published Oct. 16. 2021.