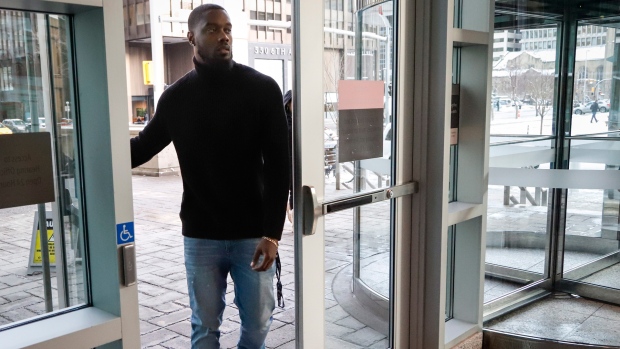 CALGARY - A woman who was at a bar the night Calgary Stampeders player Mylan Hicks was killed two years ago says the man accused in the murder was aggressive and obnoxious before the fatal shooting.

Nelson Lugela, who is 21, is on trial for second-degree murder.

Hilary Jeavons told court Lugela was one of the instigators in an altercation with a group of Stampeders at Marquee Beer Market on Sept. 25, 2016.

She says Lugela approached the players at least twice, was aggressive and bumped into her numerous times without apologizing.

“A fella in a white T-shirt and a white hat came to the bar on my right. He bumped me out of the way. He was yelling, obnoxious,” Jeavons testified.

“This man was aggressive and he acted like he was untouchable really.”

Jeavons said she was outside the bar when she heard two gunshots before giving Stampeders defensive back Joe Burnett a ride home.

“When we were driving, I had told Joe I really, really pray that your team is OK and I know who shot that gun by his actions in the bar,” she said.

Defence lawyer Alain Hepner asked Jeavons how she was so certain that Lugela was the shooter.

“Nobody else bumps a girl out of their way - he did,” she said.

“So therefore he's the shooter? That's your conclusion?” Hepner asked.

“That's how I felt. I knew who it was and when I saw his picture, it confirmed it. Yup. I'm sorry I was right.”

Hicks was shot twice after the bar closed and died a short time later.

Jamie Guy and her girlfriend Celine were outside the bar talking to Stamps running back Jerome Messam when they heard a gunshot.

“Then the shooter came around the corner and fired the gun again and then Celine and I ran behind the building.”

Guy told court the shooter was a black man, about six feet tall, close to 200 pounds with spiky hair wearing a white T-shirt and blue jeans.

“I couldn't tell who he was shooting at.”

Lugela, 21 has pleaded not guilty to second-degree murder in Hicks's death. Hicks was a member of the Stampeders practice roster and court has already heard the team was out celebrating a win over Winnipeg when the shooting happened.

The shooter and two other young men jumped into an SUV and sped away. Police arrested three people about 45 minutes later when they returned to the scene.