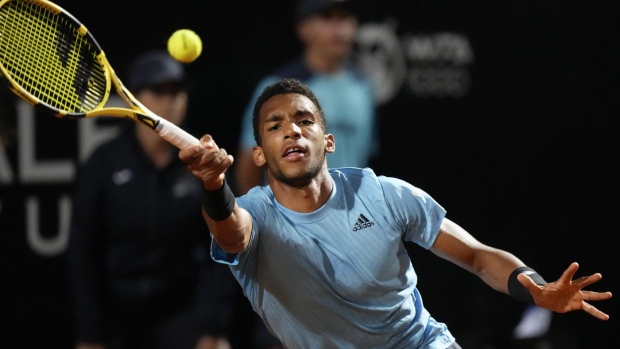 Felix Auger-Aliassime of Canada returns the ball to Novak Djokovic of Serbia during their match at the Italian Open tennis tournament, in Rome, Friday, May 13, 2022. THE CANADIAN PRESS/AP-Andrew Medichini

PARIS - Canadian tennis star Felix Auger-Aliassime could be on a collision course with clay-court legend Rafael Nadal at the French Open.

Montreal's Auger-Aliassime, seeded ninth in men's competition at the Grand Slam, was drawn into a path that could include a matchup with No. 5 Nadal in the fourth round.

Nadal has a career 105-3 record and 13 titles at Roland Garros. But the 35-year-old Spaniard enters this year's French Open battling a foot injury, which flared up during a third-round loss to Canada's Denis Shapovalov at the Italian Open earlier this month.

Still, should Auger-Aliassime meet Nadal in the fourth round and prevail, next up could be world No. 1 Novak Djokovic. The Serb star beat Auger-Aliassime 7-5, 7-6 (1) in the Italian Open quarterfinals en route to a tournament win.

Auger-Aliassime will open in Paris against a qualifier.

Shapovalov, from Richmond Hill, Ont., Leylah Fernandez of Laval, Que., and Bianca Andreescu of Mississauga, Ont., are also in the French Open main draw. Vancouver's Rebecca Marino could join them if she defeats Australia's Seone Mendez in the final round of qualifying Friday.

Women's 17th-seed Fernandez, seeded in Paris for the first time in her career, will take on France's Kristina Mladenovic in the first round.

Andreescu, the former world No. 4, will look to build on her successful clay court season following a months-long absence to recuperate physically and mentally from a tough 2021 season.

The 2019 U.S. Open champion will play a qualifier in the first round.