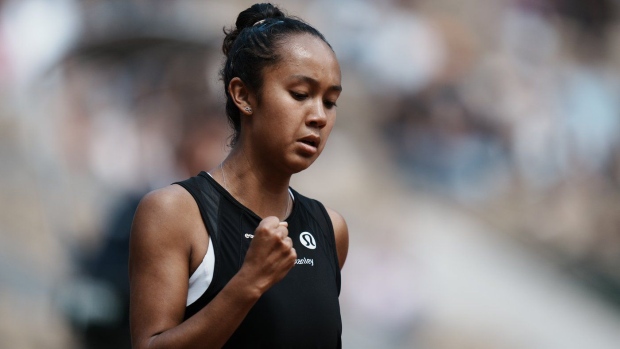 Canada's Leylah Fernandez clenches her fist after scoring a point against Italy's Martina Trevisan during their quarterfinal match at the French Open tennis tournament in Roland Garros stadium in Paris, France, Tuesday, May 31, 2022. THE CANADIAN PRESS/AP /Thibault Camus

TORONTO - A lingering foot injury that kept Canada's Leylah Fernandez out of action for over two months was also an opportunity for her to learn about herself.

Now Fernandez knows just how impatient she can be.

“But in reality I was just antsy. I was taking my racket and trying to wobble my way to the tennis court.”

Fernandez, from Laval, Que., is one of five Canadian women in the National Bank Open's singles tournament that starts on Monday at Toronto's Sobeys Stadium. The 19-year-old was only cleared to play in the tournament last Thursday and is one of several players hoping for an impactful return to play at the WTA event.

“When I did get the green light from my doctor, that was the best hour and a half of news that I could ever ask for,” the 13th-seeded Fernandez said on Saturday. “It's just been a roller-coaster and I'm excited to be back and happy to be able to compete.”

Bianca Andreescu, from nearby Mississauga, Ont., is also looking for a return of sorts. She won the event in 2019 - when it was still called the Rogers Cup - and then earned her first Grand Slam title, winning the U.S. Open for her best season ever. The victories, which both came off of all-time great Serena Williams, propelled Andreescu up to world No. 4.

However, within a few months of that high she had to take a 15-month layoff due to an injured left knee. She then had a bout of COVID-19 in 2021 and needed to take a “mental break” from tennis late last year.

Most recently, Andreescu has had issues with her back but she said on Sunday that she would be ready to go for her first-round match at the National Bank Open.

Andreescu added that she is glad to be back in front of her hometown fans for the first time since 2019 and ready to recapture some of the momentum she had that season.

“I practised today and I already felt much better than all the other days that I've been practising,” said Andreescu, who added she saw a lot of familiar faces in the crowd during her training session.

Toronto is hosting the women's side of the tournament and Montreal the men's events. In both cases, players from Russia and Belarus are allowed to compete. Players from those countries had been banned from Wimbledon because of the invasion of Ukraine.

World No. 6 Aryna Sabalenka, who is Belarusian, said she was glad to be playing competitive tennis again.

“I was really disappointed with that decision,” said Sabalenka, who last played in the German Open in mid-June. “But there was nothing I could control. I was just following the decisions they made.

“I tried my best to prepare as best as I could for the U.S. Open swing.”

Vancouver's Rebecca Marino, Carol Zhao of Richmond Hill, Ont., and Toronto's Katherine Sebov are the other Canadians in the singles tourney.

Seventeen-year-old Marina Stakusic, also from Mississauga, had hoped to become the sixth Canadian in the singles tournament but lost to Tereza Martincova of the Czech Republic 6-4, 4-6, 6-1 on Sunday in the second round of qualifying at the WTA event.

Stakusic was “shocked” to take a set from the 27-year-old Martincova, who is ranked 73rd in the world. The Canadian teen said she learned a lot about what it will take to compete in the WTA as her career progresses.

“I think fitness is the main difference between juniors and pros,” said Stakusic. “The top juniors they all have good strokes, it's not so far off from the pros. I think it's just fitness and the mental toughness that is different.

“I think like the No. 1 thing I'm going to be doing is working on fitness, endurance, all that stuff.”

This report by The Canadian Press was first published Aug. 7, 2022.