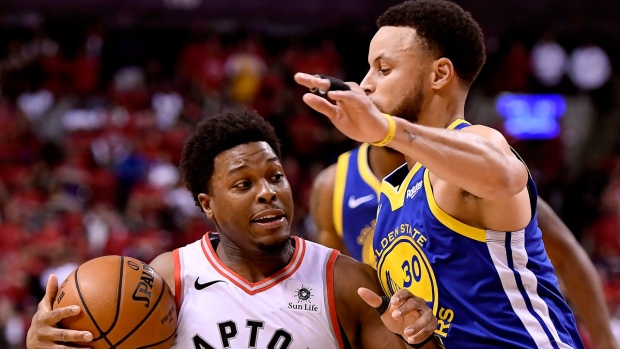 TORONTO - Newly framed magazine covers and newspapers from the Toronto Raptors' championship run line the walls of the news conference room at the team's practice facility.

A side wall features a Sports Illustrated print of Kyle Lowry kissing the Larry O'Brien championship trophy beside a grinning Kawhi Leonard and Serge Ibaka. 'We The Champs' was a popular headline on the white-framed front pages along the back wall.

The prints are a reminder of the team's greatest success and may serve as inspiration for a 2019-20 roster that is expected to be a contender in the NBA's Eastern Conference.

“We are ready to take on the new challenge and we're all really excited for it,” said Raptors centre Marc Gasol.

The Spanish veteran will help anchor a returning base that includes Lowry, Ibaka, Fred VanVleet and Pascal Siakam, the league's most improved player last season.

With the departures of Leonard and fellow starter Danny Green to free agency, expect an uptick in minutes for OG Anunoby, Norm Powell and Patrick McCaw, too.

“I think we know who we are,” said head coach Nick Nurse. “I think the best thing that we learned last year is that if we're really good defensively, it can take us a long way. I think our guys understand that.

“So I think there's a lot of buy-in here. There's not a lot of begging here for us to get them to play defence.”

Nurse worked multiple groupings during a late-morning practice Wednesday in preparation for the pre-season finale Friday night in Brooklyn.

It will be the last tune-up before Tuesday's regular-season home opener - complete with banner unveiling and ring presentation - against the New Orleans Pelicans.

“It's going to be the first small step in building the team to get as good as they can get and reach their potential come playoff time,” Nurse said.

Lowry, who recently agreed to a contract extension, was back practising this week after undergoing thumb surgery in the off-season.

However, McCaw's status remains a question mark due to a sore left knee. Nurse said McCaw was scheduled to have an MRI later on Wednesday but didn't think it was a serious issue.

The Raptors split two pre-season matchups against the Houston Rockets in Tokyo before dropping a home game to the Chicago Bulls last Sunday.

Nurse has been experimenting with different lineups as the regular season approaches. He's not afraid to go with size since his bigs have solid shooting percentages.

“It was one of the first times we got a look at the really big (lineup) with OG and Pascal at the two-three and Serge and Marc at the four-five,” Nurse said of Wednesday's session.

“It was interesting. It needs some polish but it looked interesting enough.”

Gasol is being eased back into the lineup after helping Spain win the World Cup over the summer and Lowry will likely see limited minutes in the early going as he gets back up to game speed.

With his regulars all back on the practice court, Nurse was impressed by their execution and dedication to playing a two-way game. Team chemistry was no doubt helped by the two-month post-season run last spring.

“I think we're way ahead in some areas,” Nurse said. “When we get the crew out here that's been here together, there's just so much of the playbook that I can go to that I couldn't have done a year ago at this time.”

There are plenty of new faces this season too, including Rondae Hollis-Jefferson, Stanley Johnson and Matt Thomas, among others.

Nurse challenged some of the new players to step up their defensive effort, noting he's seen some flashes of solid play but not enough consistency.

“We've got some work to do,” he said. “We've got to find who's going to blend in defensively with this crew.”

The Raptors waived forward Sagaba Konate on Wednesday, trimming the roster to 19 players.