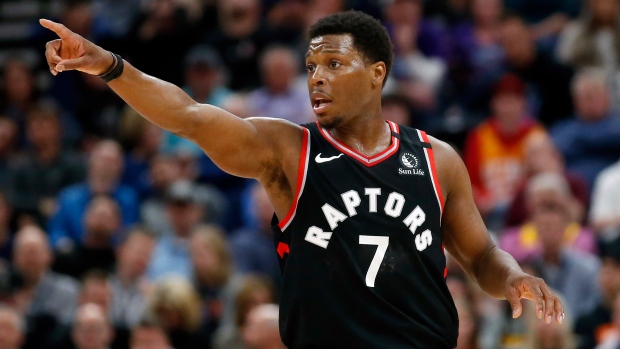 FILE - In this March 9, 2020, file photo, Toronto Raptors guard Kyle Lowry (7) directs his team during the first half during an NBA basketball game against the Utah Jazz in Salt Lake City. The defending NBA champions enter the NBA restart sitting second in the Eastern Conference. (AP Photo/Rick Bowmer, File)

The Toronto Raptors were the hottest team in the NBA in early March, on a league-best four-game winning streak, coming off a solid west coast road swing and having just clinched a playoff spot. They were gleefully making their pre-season critics eat their words.

Then the threat of COVID-19 swept through sports like a prairie fire. The NBA's suspension on March 11 was just the first domino to fall in what would become a worldwide swath.

Now, 145 days after the Raptors last played a meaningful game - a 101-92 win against the Jazz on March 9 - the Raptors will resume defence of their NBA championship Saturday against the Los Angeles Lakers in a world that looks vastly different than when they walked off the court in Utah.

The Raptors will try to hoist the Larry O'Brien Trophy again in the NBA bubble's almost-empty arena at the ESPN Wide World of Sports complex at Walt Disney World Resort in Lake Buena Vista, Fla., while the coronavirus rages all around them. And they hope to continue their work on social justice while they're at it.

After the killing of George Floyd by a Minneapolis police officer that sparked an American uprising, players worried that the NBA's resumption would stall the momentum. Their voices wouldn't be heard. So the league and its players have dedicated much of the restart to racial justice work.

As the team's senior basketball adviser Wayne Embry says in a Raptors' promo video: “We are not just returning to play, we are coming back to fight - ball in hand and fist held high.”

The Raptors are No. 2 in the Eastern Conference (46-18), and shouldn't fall any lower than third through the eight seeding-round games that determine post-season matchups.

While the loss of Kawhi Leonard to the Los Angeles Clippers last summer had people scoffing at Toronto's chances at another deep playoff run, the Raptors paid no attention, climbing to second in the conference despite being hobbled by injuries - Toronto was fifth worst in the league in games lost to injury.

A place in the NBA Finals would mean being sequestered at the NBA's campus until mid-October. Coach Nick Nurse believes his team has what it takes to ring in the fall at Disney World.

Nurse spoke of the “specialness” of certain players, and then proceeded to list off virtually his whole roster.

“It's a good group of guys, and we've got some toughness and we love to play and we love to compete,” he said. “We're looking forward to being able to do what we do out there and we think we're hard to beat.”

The Raptors have the toughest schedule of the 22 teams in the bubble, facing teams such as Milwaukee, Philadelphia and Boston over the next two weeks.

Nurse said his players can't wait to get going.

“The feel, there's an excitement and an energy there but it seems to be very similar, back to regular season,” he said. “It feels like it's March . . . as far as the games go, it's an attitude that it's March rather than November, October (the traditional start of the regular season), whatever.”

Injuries are a concern after a four-month layoff that for many players was the longest of their career.

Nurse likely won't tighten up his rotation until the playoffs, to allow his players time to ease back into playing full-out games. But it could be tough to rein them in.

“You know it's gonna be too hard for me and players like myself and all pros to hold back,” scrappy guard Kyle Lowry said. “Nick's gonna do his best for us and we trust him and what he's gonna do and we're gonna roll with the decisions that he makes and we're gonna go out there and try to get better and try to win every game.”

Serge Ibaka believes the Raptors' experience and sense of togetherness will carry them far into the post-season.

Is there anything Lowry is curious about seeing from his team after the long hiatus?

This report by The Canadian Press was first published July 31, 2020.