NBA decides to remain silent for rest of China trip 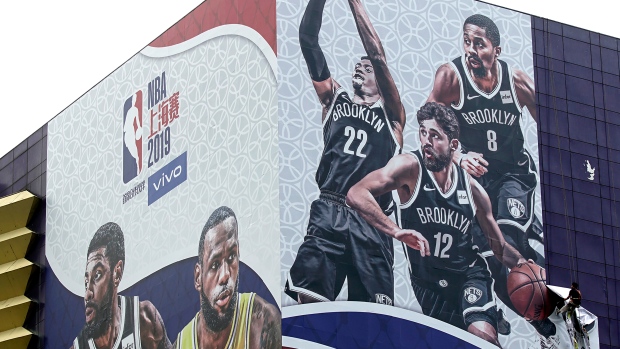 In this Oct. 9, 2019, photo, a worker takes down a billboard advertising an NBA preseason basketball game on Thursday between the Los Angeles Lakers and Brooklyn Nets in Shanghai, China. The NBA has postponed Wednesday's scheduled media sessions in Shanghai for the Brooklyn Nets and Los Angeles Lakers, and it remains unclear if the teams will play in China this week as scheduled. (AP Photo/File)

The NBA has decided to stay silent for the remainder of its trip with the Los Angeles Lakers and Brooklyn Nets in China.

The Lakers and Nets will play on Saturday in Shenzhen as planned, though no news conferences for either team are scheduled to be held before or after the game. Unlike Thursday, when Chinese officials decided that there would be no media availability for NBA Commissioner Adam Silver or the teams at the first game of the China series in Shanghai, this decision was made by the league.

It's part of a rift that began last week when Houston general manager Daryl Morey tweeted support for anti-government protesters in Hong Kong.

The league made its decision after discussions with the teams and the National Basketball Players Association.