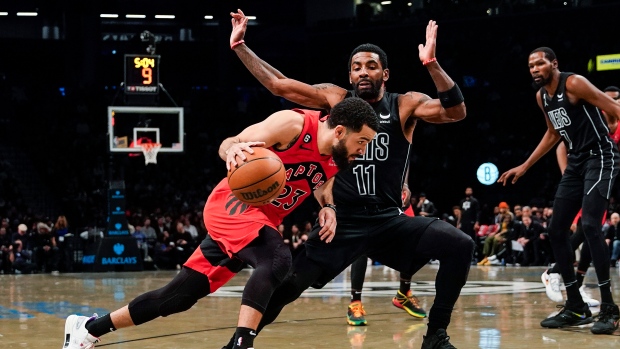 Kevin Durant had 17 points and Nic Claxton chipped in 15 for the Nets, who have won four consecutive games.

Brooklyn led by 36 points midway through the second quarter and held a 93-72 advantage at the start of the fourth.

The Raptors rattled off 11 straight points to pull within 110-103 after Scottie Barnes' dunk with 37 seconds left.

Irving and Joe Harris combined for 31 points to help the Nets take a 72-49 lead at halftime. Brooklyn's 72 first-half points were a season high as they shot 28 for 48 from the field and 8 for 17 from long distance.

Brooklyn raced out to a 41-17 lead in the first quarter. Siakam hit a pair of free throws with 8:01 to play and Irving answered by initiating 15-0 run with a basket before T.J. Warren - playing for the first time in nearly two years - capped it with a pullup jumper to extend the lead 32-10 lead with 3:38 remaining.

The Raptors missed seven shots and turned over the ball three times during a stretch of five minutes before Thaddeus Young hit a jumper.

Raptors: Toronto has lost three straight games on the road. â€¦ Barnes had 15 points and Gary Trent Jr. added 16 off the bench.

Nets: Brooklyn's previous high for points in the first half was 69 against New York on Nov. 9.

IT'S BEEN A LONG TIME

Warren was back on the court for the first time in two years, coming off the bench in the first quarter with 4:14 left and got his first shot to fall on his first attempt a minute later. The 29-year-old forward had not played in a game since Dec. 29, 2022, while he was with Indiana, due to multiple stress fractures on his left foot.

Warren said it took him two to four months to recover following both surgeries, which he said was a “difficult process dealing” with.

Warren led the Pacers with 19.8 points per game during the 2019-20 season and enjoyed a breakout performance in the NBA bubble, averaging 31 points, including a 53-point outburst.

He hopes his addition to the rotation would be a boost to a team that has struggled during the early on this season and entered play Friday night just one game over .500.

“Just effort, my ability to be versatile out there, just be a two-way player, something I took pride in since coming in the NBA, just being able to guard multiple guys and just be able to be that three lever scorer at the same time and just try to feed off guys that just play hard,” Warren said.