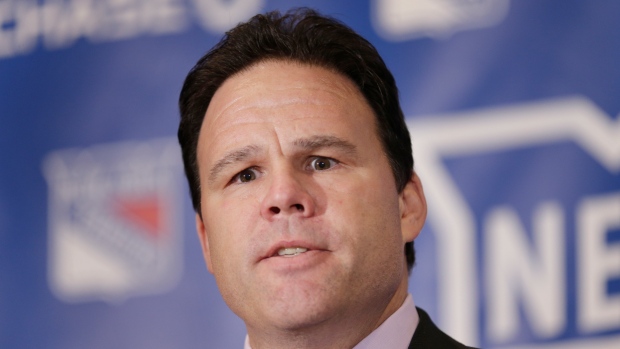 The New York Rangers abruptly fired president John Davidson and general manager Jeff Gorton on Wednesday with three games left in the season, a shocking move in the aftermath of the latest controversy for the storied NHL organization.

Chris Drury was named president and GM. He previously served as associate GM under Davidson and Gorton.

”We want to thank JD and Jeff for their contributions to the organization,” owner James Dolan said in a statement. “They are both great hockey professionals who worked hard for the Rangers. However, in order for the team to succeed in the manner our fans deserve, there needs to be a change in leadership.”

The stunning news came less than 24 hours after the team ripped the league for fining but not suspending Washington's Tom Wilson for his role in a scrum Monday night that injured Rangers star Artemi Panarin. A team statement called the decision a dereliction of duty and that George Parros was “unfit” to remain in his job as head of player safety.

It was not immediately clear if the front office shakeup had any connection to the criticism of the league. But the incident obviously had an effect on the Rangers' game against the Capitals on Wednesday night, which was the first in NHL history to feature six fights in the first five minutes and served as the coda for an eventful few days.

“It's obviously a crazy day,” Rangers forward Ryan Strome said. “You add in the anxiety or anticipation all day from our group, and then waking up from a pregame nap with the whole set of news. It's never easy, I think, in pro sports.”

Whatever the reason, cutting ties with Davidson and Gorton was unexpected. Since Gorton became GM in 2015 and Davidson joined the organization in spring 2019, the Rangers have built one of the most impressive collections of young talent in hockey.

The Rangers qualified for the NHL's expanded, 24-team playoffs in 2020, won the draft lottery and the opportunity to select Alexis Lafreniere with the top pick, and are expected to finish fifth in the eight-team East Division this season.

They were only recently eliminated from playoff contention after a season that included defenceman Tony DeAngelo being kicked off the team for an undisclosed incent, Panarin taking a leave of absence after a Russian tabloid printed allegations of abuse that he denies and Panarin being injured in the scrum with Wilson.

But the future looks bright for the Rangers, who, in addition to Lafreniere, picked forward Kaapo Kakko second overall in the 2019 draft, found their goaltender of the future in Igor Shesterkin and acquired an elite No. 1 defenceman in Adam Fox.

Those players, along with Panarin and centre Mika Zibanejad, are expected to make up a core that contends for the post-season for years to come. Gorton and Davidson are responsible for bringing in all those players.

“I think we're all surprised,” said coach David Quinn, whose own status has been plunged into uncertainty. “We all felt good about what we've done up to this point.”

The path forward will now be charted by Drury, a rising star in management who finished his playing career as captain of the Rangers from 2008-11. He was recently named USA Hockey's GM for the upcoming world championships and earned a promotion from assistant GM of the Rangers in February.

“Chris is a very sought-after executive and a strong leader, who has proven himself to be one of the top young minds in hockey,” Dolan said. “We are confident he will effectively guide the team to ensure the long-term success we promised Rangers fans.”

Former Rangers GM Glen Sather, now a senior adviser and a favourite of Dolan's, will work with Drury in his transition and continue in his consulting role.

“Chris and I have always had a great working relationship,” Quinn said. “We certainly see a lot of the same things in the game of hockey. We've got a great deal of respect for each other.”

John Davidson, the new president of the New York Rangers, speaks during a news conference in New York, in this Wednesday, May 22, 2019, file photo. (AP Photo/Seth Wenig, File)