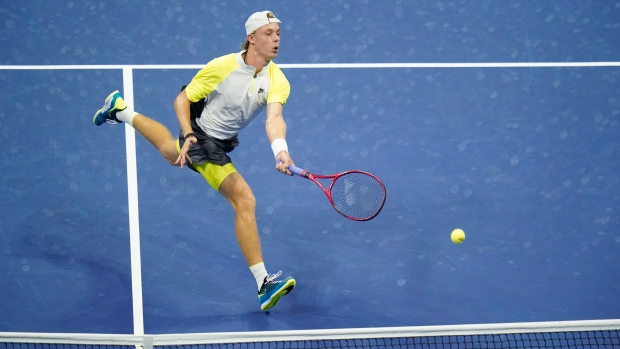 Denis Shapovalov, of Canada, returns to Pablo Carreno Busta, of Spain, during the quarterfinal round of the US Open tennis championships, Tuesday, Sept. 8, 2020, in New York. THE CANADIAN PRESS/AP, Frank Franklin II

When the COVID-19 pandemic put the ATP Tour on hold earlier this year, Canada's Denis Shapovalov used the extended break to work on using a more patient approach on court.

The subtle change has paid off with strong results since play resumed.

Shapovalov cracked the top 10 for the first time this week after impressive performances at the US Open and the Italian Open. He's hoping to ride that momentum into the French Open starting Sunday at Roland Garros.

Tennis broadcaster Robert Bettauer, a former national team coach, said he has been impressed by Shapovalov's net game and consistency from the backcourt.

“His net game has gone to a whole other level and I give credit to him playing doubles for that,” Bettauer said. “He's developed a doubles player volley. It's really compact and efficient. And so now he's really starting to take advantage of his penetrating ground strokes.”

In women's singles, Leylah Annie Fernandez of Laval, Que., and Eugenie Bouchard of Westmount, Que., have spots in the main draw. Fernandez, who turned 18 this month, will open against 31st-seeded Magda Linette of Poland while Bouchard, a wild-card entry, will meet Russia's Anna Kalinskaya.

World No. 20 Milos Raonic of Thornhill, Ont., withdrew from the tournament this week. Raonic, whose game is better suited to hardcourt and grass surfaces, hasn't played at Roland Garros since 2017.

Shapovalov reached the US Open quarterfinals and advanced to the semifinals last weekend in Rome. Known for an aggressive all-out style, he gives credit to coach Mikhail Youzhny for helping him focus on utilizing a little more restraint on court.

“We had a lot of time to really build up the game,” Shapovalov said at a recent availability. “He's really trying to make me more of a well-rounded and smarter player. I really feel like he's helped me a lot with that.

“Definitely being patient is a big thing that we've worked on.”

At the last Grand Slam in New York, Auger-Aliassime, Shapovalov and Pospisil made Canadian tennis history when they all reached the round of 16 at the tournament.

“The pressure isn't external, it's internal,” said Bettauer, the CEO of the Pacific Institute for Sport Excellence. “And so by going much deeper in a Grand Slam, you start to understand what that pressure feels like. You start to really understand what the sustained performance level needs to be to beat (top opponents).

“When you get to the 16s and quarters, everybody's exceptionally good. They want it as much as you want it. Nobody's giving away an inch. So you really have to understand how to not only play your game, but also to be able to sustain your game.”

Broadcaster Jesse Levine, a former Canadian Davis Cup team member, was on-site at Flushing Meadows to call matches. He said the positive results can rub off on the others.

“When you see your friend or your countryman going that far in a tournament, it gives you that motivation and that belief in it,” Levine said. “And of course they push each other.”

Spain's Rafael Nadal is the defending champion at Roland Garros. Competition will continue through Oct. 11.

“Both Felix and Denis have all-court games,” Bettauer said. “Meaning that they seem to have the ability to transition fairly well from hardcourt to grass to clay ... and I think Vasek is just bringing a high level of game to his competition. So I think (they're) going to be very dangerous in Paris.”

Diez, meanwhile, qualified Thursday with a 6-3, 6-4 win over France's Enzo Couacaud. It will be his first career appearance in a Grand Slam main draw.

Shapovalov and Raonic are the only Canadian singles players to crack the ATP Tour's top 10. Raonic made his top-10 debut in August 2013 and reached a career-high No. 3 just over three years later.