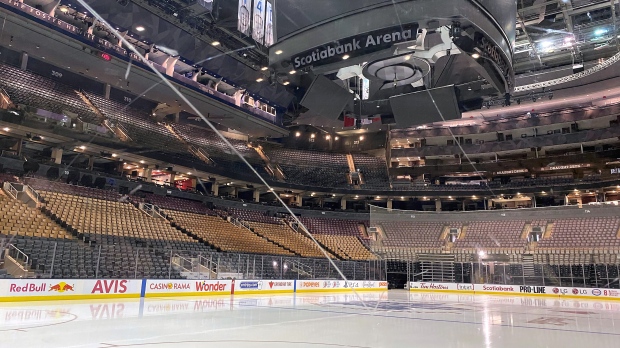 Freshly-surfaced ice at Scotiabank Arena, home of the Toronto Maple Leafs, is shown in Toronto on March 12, 2020. THE CANADIAN PRESS/Joshua Clipperton

The NHL and NHL Players' Association have taken a massive step towards resuming the pandemic-hit 2019-20 season later this summer in Edmonton and Toronto - along with securing labour peace for the foreseeable future.

The league and its union announced Monday the two sides have hammered out a tentative deal on the return-to-play protocol as well as a memorandum of understanding on a four-year extension of the current collective bargaining agreement.

The NHL board of governors, the NHLPA's executive board and full membership must now ratify the documents, which are tied together, in three separate votes. If the proposals get the green light, training camps would begin July 13, with the 24 teams set to resume heading to the two Canadian hub cities on July 26. Competitive game action would then commence Aug. 1.

The league has yet to announce the two hubs for its return-to-play plan this summer, but Toronto and Edmonton are the destinations, a person with direct knowledge of the decision told The Associated Press.

The person spoke on the condition of anonymity because the league and the NHLPA have not released this information. The person said the league is in part being cautious and allowing itself flexibility in the event of potential spikes in COVID-19 infections in not yet determining which cities will host the conference finals and Stanley Cup final.

Hashed out in the shadow of unprecedented economic conditions brought on by COVID-19 - and viewed as crucial for a resumption of play - the proposed CBA would bring at least 14 consecutive years of NHL-NHLPA harmony after lockouts wiped out the 2004-05 season, and cut the 1994-95 and 2012-13 campaigns to 48 games.

While details of the CBA, which would last through the 2025-26 season, weren't made public Monday, it's believed the salary cap, escrow payments from players to owners, and Olympic participation all figure prominently. Escrow, which guarantees a 50-50 split of hockey-related revenues, was a thorny issue for players before the pandemic significantly impacted the league's bottom line when the schedule was suspended March 12.

Getting back to the Olympics has also been a priority for players. The NHL, which would still have to negotiate with the International Olympic Committee, skipped the 2018 Winter Games after participating in five straight between 1998 and 2014.

The league and players unveiled the 24-team format for a resumption of play in late May.

The plan to resuscitate the season calls for players to be segregated from the general population in tightly-controlled “bubbles” - games will be played without fans - in hopes of keeping the coronavirus at bay. The NHL, which will test everyone inside the bubble daily, has consistently maintained one or more positive results wouldn't necessarily derail the restart.

The NHL and the NHLPA outlined extensive health and safety measures for training camps and resumption of play Monday - referred to as Phase 3 and Phase 4, respectively, of its return-to-play plan - in two documents totalling 47 pages.

Teams will be allowed to bring 52 personnel, with no more than 31 players, to its hub. Every person in the bubble will be subject to daily testing, including players, staff, hotel workers, food service employees and bus drivers. Every team member/player inside the bubble will be expected to remain there except in specific extenuating circumstances, including medical attention, the birth of a child or a death in the family.

Anyone returning to the bubble will be subject to a minimum four-day quarantine with daily nasal swab tests for COVID-19.

While the league is encouraging physical distancing at all times, players won't be required to wear masks when exercising or on the ice. The same goes for coaches behind the bench and off-ice officials. Masks are required to be worn inside the bubble by any individual not in their hotel room.

The NHL and NHLPA have the ability to delay, postpone, move or cancel games in the event there's a “risk to player health and safety” and/or a chance that “the integrity of the competition” is in jeopardy, including “an uncontrolled outbreak of COVID-19.”

There is not, however, any specifics as to what would constitute “an uncontrolled outbreak.”

Individuals leaving the bubble without permission may be subject to consequences up to and including removal from Phase 4. Teams could also be hit with steep punishments, including fines and/or loss of draft choices.

Players are allowed to opt out of Phase 3 and Phase 4 without penalty, but have to notify their team this week.

Vancouver, Las Vegas, Chicago, Columbus, Dallas, Los Angeles, Pittsburgh and Minneapolis/St. Paul were the other cities originally in the running to be hubs.

The NHL is looking to restart its season with a blueprint that includes eight best-of-five qualifying round series before pivoting to the typical 16-team playoffs. It's hoped the Stanley Cup, which has been awarded all but twice since 1893, will be handed out sometime in the fall.

Las Vegas was viewed as a hub front-runner because its massive hotel complexes could be more-easily secured in a bubble scenario until a recent surge in COVID-19 cases across large swaths of the United States - the death toll there currently stands at more than 130,000 people - likely made the destination far less appealing.

But despite Monday's good news, there remain difficult waters to navigate.

The league and NHLPA will not quarantine players during training camp, but instead ask they stay home when not at the rink in hopes isolation and testing will be enough to avoid any outbreaks.

Of the 396 NHLers tested at team facilities between June 8 and July 6 during voluntary workouts as part of Phase 2 protocols, 23 results - in the neighbourhood of six per cent - came back positive. The league said it's also aware of 12 other positive tests for players not taking part in Phase 2.

The Tampa Bay Lightning closed their practice facility last month after three players and additional staff members tested positive for COVID-19. Of the 24 teams poised to resume play, 18 are located in the U.S., including current virus hot spots like Florida, Texas and Arizona.

Four clubs previously confirmed 10 positive tests in the spring, with five coming from the Ottawa Senators, three from the Colorado Avalanche, and one each from the Pittsburgh Penguins and Boston Bruins.