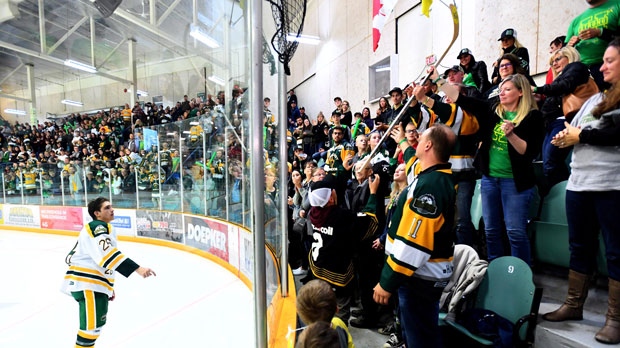 Humboldt Broncos forward Brayden Camrud passes his stick over the boards to fans after his SJHL game against the Nipawin Hawks in Humbolt, Sask., on Wednesday, Sept. 12, 2018. The Humboldt Broncos played their first game since a bus crash claimed 16 lives in April. THE CANADIAN PRESS/Jonathan Hayward

Like the rest of the hockey world, Mike Babcock was shaken by April's bus crash that devastated the Humboldt Broncos.

The head coach of the Toronto Maple Leafs hopes the junior hockey team's return to the ice Wednesday night will serve as another step in the healing process.

The Broncos were travelling to a Junior A playoff game against the Nipawin Hawks when their bus carrying 29 people collided with a truck -- killing 16, including 10 players, and injuring 13 more.

The team, which lost head coach Darcy Haugan in the crash, vowed to rebuild. Two players that survived suited up Wednesday in the Broncos' first game since the accident, which was televised nationally on TSN, while eight others no longer with the club were also on hand.

"They're trying create some sort of normalcy," Babcock said Thursday. "Now I don't know how you ever have normalcy, to be honest with you, in that situation."

Babcock tried to do his part by returning to his home province in May to pitch in at the Broncos' spring training camp.

"I grew up right next to Humboldt," He said. "The emotion and the people (that) I talked to from coaches to parents, a ton of them, it was great they were able to get started, get going."

"The hour leading up to it and then watching the game, it was very special and tough for any hockey family," he said. "It's a small world, the hockey community, and touches a lot of families. I grew up on those buses, I was doing stuff like that.

"It's a tough situation, it's hard to even find words, but it was a special night."

"It's pretty touching when you see the team playing," Tatar said. "It's not easy to think (about) what happened."

Vancouver Canucks defenceman Erik Gudbranson said he was impressed by the post-game ceremony where 29 banners were raised -- one for each victim of the crash.

"It was heart-wrenching to see those boys, to see the pain on their faces, see what they had to go through," he said.

"It can't be easy, two returning players and a lot of new faces, but the support has been amazing and I'm sure the city and the team feels supported," said Smith, who is also from Saskatchewan. "It was cool to see everyone come together. It was pretty special. We'll be keeping an eye on them."

Leafs defenceman Morgan Rielly, who played in the SJHL with the Notre Dame Hounds in Wilcox, Sask., as a teen before making the jump to the WHL with the Moose Jaw Warriors, holds the province close to his heart.

"I feel very lucky to have spent a large portion of my life out there," he said. "That part of the country means a lot to me, and I think that (Wednesday) night was a good example of the kind of people that live out there.

"That was pretty emotional."

-- With files from Gemma Karstens-Smith in Vancouver, Lisa Wallace in Ottawa and Julian McKenzie in Montreal