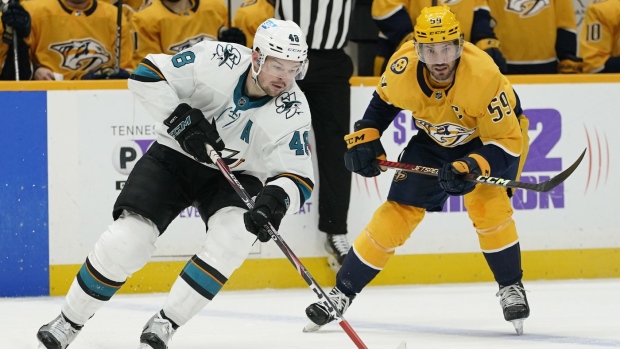 San Jose Sharks' Tomas Hertl (48) moves the puck ahead of Nashville Predators' Roman Josi (59) in the first period of an NHL hockey game on April 12, 2022, in Nashville, Tenn. The NHL has announced its 2022-23 schedule, with the Predators and Sharks kicking off the season Oct. 7 at O2 Arena in Prague, Czech Republic. THE CANADIAN PRESS/AP-Mark Humphrey

The upcoming NHL regular season will start in Europe, with the first games in Canada not coming for another five days.

The NHL announced its 2022-23 schedule Wednesday, with the Nashville Predators and San Jose Sharks kicking off the season Oct. 7 at O2 Arena in Prague, Czech Republic.

The first North American games are scheduled for Oct. 11, with the Tampa Bay Lightning visiting the New York Rangers and the Los Angeles Kings hosting the Vegas Golden Knights.

A pair of Canadian showdowns are part of a six-game schedule on Oct. 12, with the Toronto Maple Leafs visiting the Montreal Canadiens and the Edmonton Oilers hosting the Vancouver Canucks.

Those two matchups were also the first Canadian contests of the 2021-22 season.

The Ottawa Senators begin their season on the road Oct. 13 in Buffalo, the same day the Calgary Flames open at home against Stanley Cup champion Colorado.

The Winnipeg Jets open their season Oct. 14 at home against the Rangers.

All seven Canadian teams will be in action Jan. 21 for "Hockey Day in Canada."

The NHL Winter Classic on Jan. 2 will feature the Boston Bruins hosting the Pittsburgh Penguins outdoors at Fenway Park.