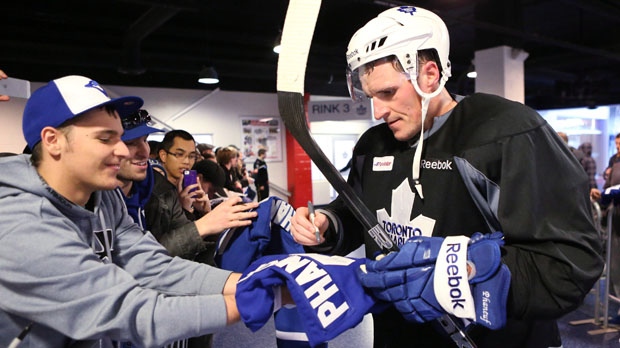 Toronto Maple Leafs captain Dion Phaneuf signs a fan's shirt after a training session as the Leafs prepare for the new NHL season in Toronto on Tuesday, Jan. 15, 2013. (The Canadian Press/Chris Young)

NHL teams have been wooing fans back with apologies, open practices and free pop and popcorn the last few days.

They're saying sorry for the games lost to the lockout with the promise of giveaways and discounted tickets, food and merchandise at their upcoming home-openers.

From 1,000 autographed jerseys to be given away in Chicago this season, to fans selected to drop the ceremonial puck in San Jose's home-opener, NHL marketing departments have stuffed the goody-bags to start this abbreviated season.

But cheap and short-term is what a couple of people in the sport marketing industry call the measures to win back the hearts and minds of fans.

It costs teams little to open practices to the public and to feed them pop, popcorn and hot dogs, says one.

"A free practice and a free (meal) combo is a gesture. It's better than a kick in the pants. It's a token gesture I think."

Among the baseball cap giveaways, half-priced beer and $1 hot dogs on offer at some home-openers, there are promotions that have more substance or creativity than others.

The Ottawa Senators are letting children under the age of 14 in for free with the purchase of an adult ticket for Monday's game against the Florida Panthers. Parking is free in select lots.

Until Monday, those who buy on-line tickets to any Columbus Blue Jackets game this season don't have to pay the booking fee that pads the price of a ticket.

The Colorado Avalanche are offering a buy-one, get-one free ticket for their home-opener Tuesday.

In addition to giving away 1,000 tickets to Monday's game against Buffalo, the Toronto Maple Leafs are covering the cost of the public's skate rentals at the Nathan Phillips Square outdoor rink that day.

One of the Calgary Flames' enticements is a minimum $50,000 payout to the winner of the 50-50 draw at their first two home games Sunday and Monday.

The NHL has apologized via full-page newspaper ads for a schedule trimmed from 82 games to 48. The league is having its own game ticket and T-shirt giveaway Saturday and Sunday at a Reebok store in Manhattan.

But Cary Kaplan of the Cosmos Sports marketing firm in Mississauga, Ont., points out that few of these olive branches extend beyond the first week of the season.

"I'd like to see it sustained. An apology sort of implies a one-off. It should be more than that. Why don't you make a long-term commitment to have a very strong relationship with your fans?"

A powerful way for the league to re-connect with fans is to put the players in contact with them, he says.

"To me, the value of meeting Sidney Crosby is a lot of money," Kaplan explains. "Kids want that more than a free popcorn.

"People look up to these players. Unfortunately, as players become wealthier and as salaries go up in bigger leagues, they tend to be less accessible."

He suggests that if players were asked to personally phone season ticket holders, that goes further in repairing the damage to that relationship than a $140 jersey sold at half price.

"People would talk about that across North America," he says.

Autograph sessions with players after every game would be time consuming, but in markets where the NHL is struggling, Kaplan says that effort wouldn't go unnoticed.

"It's a bit of pain to say 'We have a road trip, but all the players are going to sign autographs for an hour after the game.' The coach, the GM and the players don't like that. They're tired, they just lost 5-0," he says.

"Too bad. The fans are the ones who are paying the bills. If they do things like that, that they've never done before and it's sustained, I do think people in Nashville, Florida and Phoenix would say 'We weren't happy with what they did, but they seem to care."'