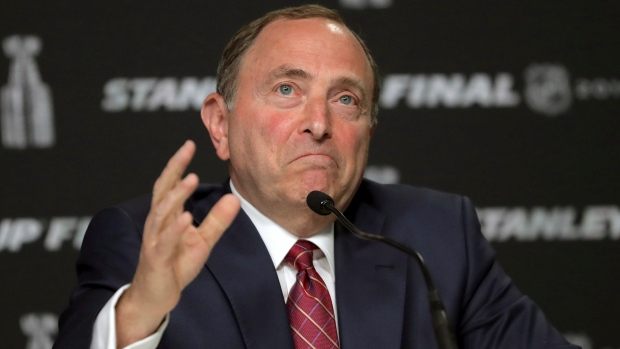 FILE - In this May 27, 2019, file photo, NHL Commissioner Gary Bettman speaks to the media before Game 1 of the NHL hockey Stanley Cup Final between the St. Louis Blues and the Boston Bruins, in Boston. The NHL nailed down the final details of a playoff format if the season can resume on the same day word came out that another player has tested positive for the coronavirus. (AP Photo/Charles Krupa, File)

The NHL's return-to-play plan came into even sharper focus Thursday.

If the league is able to resume the pandemic-hit 2019-20 season this summer, its playoffs will feature the usual four rounds of best-of-seven series after the qualifying portion of the schedule.

The NHL announced the 24-team format last week, but had yet to iron out some of the specifics, including whether or not the first two rounds of the playoffs would be best-of-five or best-best of seven.

Along with the decision on series length, teams will be re-seeded after each playoff round instead of being placed in a bracket.

NHL commissioner Gary Bettman said last week the league favoured a bracket, which has been in place since 2014. The players, however, preferred re-seeding and that stance won out.

The return-to-play blueprint - which will eventually require the approval of health and government officials to get off the ground in two so-called “hub” cities - would begin with separate, three-game round-robin tournaments for the top-4 clubs in both the Eastern and Western Conference.

The league said any ties at the end of round-robin play will be broken by regular-season points percentage, and that the seeding order will stay the same throughout the playoffs.

The remaining franchises would take part in eight best-of-five qualifying round series, leaving the NHL with its traditional 16-team playoff.

Toronto Maple Leafs captain John Tavares, who was a member of the NHL/NHLPA Return to Play Committee, said last week that players were intent on making sure there's no asterisk if a team eventually lifts the Stanley Cup at the end of the season.

“Anyone who gets their name on it wants to earn it,” he said. “I think it's going to be a very worthy and deserving Stanley Cup champion.”

Boston, Tampa Bay, Washington and Philadelphia would compete for the No. 1 slot in the East under the plan, while defending Cup champions St. Louis, Colorado, Vegas and Dallas would do the same out West.

The league, which was forced to pause its schedule in March because of COVID-19 and declared the regular season completed last week, is hoping to move to Phase 2 of its overarching return-to-play protocol later this month. That would see practice facilities opened up to small groups of players for on- and off-ice workouts under strict health and safety restrictions.

The hope is teams will be able to hold training camps (Phase 3) sometime in July before resuming play either later that month or in early August (Phase 4).

Buffalo, New Jersey, Anaheim, Los Angeles, San Jose, Ottawa and Detroit each saw the 2019-20 season officially come to an end last week with the return-to-play announcement. It's possible those seven teams might not play another meaningful game until early January, which Bettman said last week could be the starting point for the 2020-21 campaign.

The Stanley Cup has been awarded every year since 1893, save for 1919 because of the Spanish flu outbreak, and 2005 when a lockout led to the cancellation of the entire campaign.

“It's hard to make everyone happy and I feel this is the best scenario for the league and for the players to get as many teams involved,” Calgary Flames forward Mikael Backlund said of the return-to-play plan Thursday. “It's kind of only two teams (Montreal and Chicago) that get a free card here. All the rest of the teams were in the race. It would have been harder to just go 16 teams where 22 teams probably had a chance to make it.

“The five games to start is probably a good idea, too. It could go fast if you struggle early in three games.”

While the announcement Thursday was another step in the process, there's remains plenty of work to resume a season that could now stretch into October.

Apart from choosing the two hub cities - Vancouver, Edmonton and Toronto are three of 10 North American markets in the running - testing capacity, safety, and whether or not players will be quarantined away from family for two months or more are among the issues that still to be addressed.

The NHL has said it will require up to 30,000 COVID-19 tests for players if the season resumes, adding that a positive result wouldn't necessarily derail the 24-team format.

-With files from Donna Spencer in Calgary