NHLers weigh in on league's vaccine policy: 'I've gotta be careful with this one' 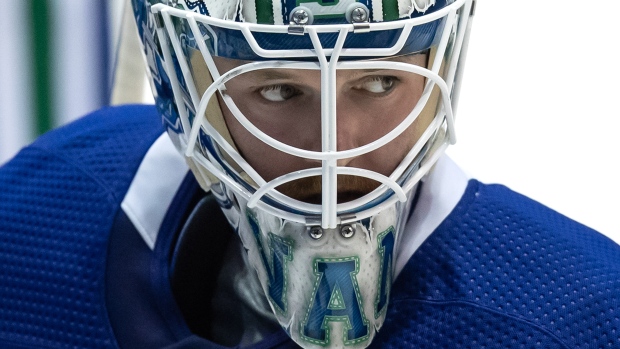 Not because he didn't know what to say - the Vancouver Canucks goalie just wanted to be sure he chose his words carefully when the topic pivoted.

“I've gotta be careful with this one ... there's so much tension about it,” Demko said of the NHL and COVID-19 vaccinations. “I'll just speak for myself: it's part of the job. You've got to do it if you want to fully participate in the season this year. Getting the vaccine isn't something that I'm passionate enough (about) to inhibit my ability to play.

“I had no problem getting it.”

The NHL and NHL Players' Association haven't mandated vaccines for players with training camps starting this week, but there's little doubt tough restrictions - including not being able to cross the border from the U.S. into Canada without a two-week quarantine - provided an incentive for many on the fence.

NHL deputy commissioner Bill Daly said last week he estimates 98 per cent of players will be vaccinated by the start of the season, leaving between 10 and 15 players without the jab among roughly 700 competitors on 32 teams.

“The league's trying to operate as safe as possible and trying to encourage the safest possible environment,” Toronto Maple Leafs captain John Tavares said. “They've encouraged that and tried to minimize risks to keep everybody safe, and to make sure that everything functions.

“But it's anyone's choice to determine what they feel is best for them ... I think you can make an argument on both sides. That's what the pandemic's really been all about. It's been a very difficult situation all the way through, and even up until now.”

Clubs will have the right to suspend unvaccinated players without pay this season if they're unable to participate in hockey activities as part of coronavirus protocols, including games in Canada.

Sporting a mask, Leafs winger William Nylander opened his press conference at the start of Toronto's camp by informing reporters he's not yet fully vaccinated.

“Had couple medical things to take care of,” he said. “I'll be fully vaccinated by the beginning of the season.”

Vaccinated players that test positive in 2021-22 for COVID-19 will be treated as having hockey injuries and still get paid, while their unvaccinated counterparts are set to have their movements restricted on the road.

Regular testing for the coronavirus will continue for vaccinated players.

Canucks forward Jason Dickinson said the decision to role up his sleeve was an easy one.

“It's slowing down everybody else's life.”

But Winnipeg Jets goalie Connor Hellebuyck, whose team is fully vaccinated, said he felt pressured into getting the shot.

“I'm not anti-vaxx by any means, but I'd like to have that decision for myself,” he said. “I had just gotten COVID and gotten over it, and then I had to get the (vaccine), which made me feel like I had COVID all over again. If I could have had at least some time to choose, maybe I would have got it (when) they recommend - three months later.

“I would have liked (the NHLPA) to have helped us a little more ... I just feel it could have been worked out a little bit better.”

Unlike last season's playoffs when the Vegas Golden Knights and Tampa Bay Lightning were permitted to cross the border to play the Montreal Canadiens, there's no quarantine exemption from the Canadian government for the 2021-22 campaign.

NHL coaches and staff are required by the league to be vaccinated, which cost Columbus assistant Sylvain Lefebvre his job after he declined to adhere to the policy.

“You're teetering the line between your own personal choice and what we want to do, and then how it affects others,” Edmonton Oilers winger Zach Hyman said when asked about the NHL's policy for players. “If someone doesn't feel comfortable getting vaccinated, then that's his right and I guess he'll have to abide by the rules of the league.”

As camps opened this week, news started to filter out regarding players that are yet to be vaccinated. Detroit Red Wings forward Tyler Bertuzzi has declined to get his shots, meaning he will miss all nine of Detroit's games in Canada this season - and lose out on a considerable chunk of his US$4.25-million salary.

“Just personal choice, freedom of choice,” Bertuzzi said. “It was a life decision.”

Oilers winger Josh Archibald is also unvaccinated, which GM Ken Holland said could see him sit out up to 30 games in the U.S. because of the quarantine required upon returning to Canada.

“To get vaccinated has been a personal decision,” said Holland, who added veteran defenceman and vaccine holdout Duncan Keith got jabbed and will join his new team soon. “It's been an easy decision for some, and it's been a difficult decision for some.”

The Canucks suffered through a devastating COVID-19 outbreak last season, and will be fully vaccinated in 2021-22.

“A lot of these guys have young kids and they all ended up getting sick,” Vancouver GM Jim Benning said. “As a group, they knew the importance of getting vaccinated to give ourselves the best chance to get back to normal. So there wasn't too many guys that didn't want to get vaccinated.”

Canucks forward J.T. Miller said the protocols are out of his hands.

“I just try to worry about what I can control,” he said. “They're set in place for a reason and I'm just here to do my part. I got vaccinated, I did what I had to do to come here and do my job.

“You've got to do what the rules are.”

Dickinson said a vaccinated league is the quickest way back to some semblance of normal.

“We want to play games,” he said. “We want fans in the building.”

“We want to get back to life.”

-With files from Gemma Karstens-Smith in Vancouver.

This report by The Canadian Press was first published Sept. 23, 2021.