No fans, possibly no Matthews and McDavid as Leafs prepare to host Oilers 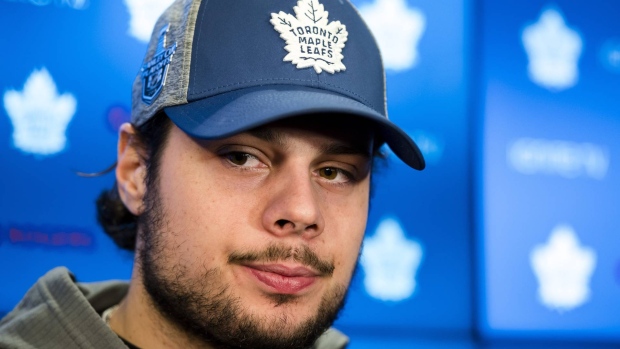 Wednesday night was supposed to feature all those elements when the Toronto Maple Leafs welcome the Edmonton Oilers to Scotiabank Arena.

Like so much of life since March 2020, however, COVID-19 has released most of the air from that balloon.

New provincial pandemic restrictions in Ontario regarding crowd sizes means the showcase will be played without spectators, while the status of two superstars remains in doubt following recent positive tests for the coronavirus.

Matthews, who was held out of consecutive practices this week, produced a positive result Monday before the followup came back negative on Tuesday. Leafs head coach Sheldon Keefe said further tests will be required prior to determining the status of his No. 1 centre for Wednesday.

Neither player practised Tuesday in Toronto and both were set to be tested again before their availability for Wednesday's game can be determined.

Add the Toronto return in an empty arena of Oilers winger Zach Hyman, who won the hearts of fans thanks to his grit and determination during six seasons with the organization despite the franchise never getting over its playoff hump, and Wednesday looks a lot different than it did when the schedule was released.

“People have been disappointed for the last couple years now, so I think everybody's used to it,” Hyman, who signed a free-agent deal with Edmonton in July, said after Tuesday's on-ice session at the Leafs' practice facility. “Would have liked to have fans in the building and would like it to be normal.

“And would like everybody to be playing on both sides.”

Much like last season in the one-and-done North Division, there will once again be tarps covering seats in the lower bowl, canned crowd noise, and a need for players to create their own energy.

“It's just out of our control,” Leafs captain John Tavares said. “Getting negative about it or down on it and putting a lot of energy there just doesn't make sense.

“We'll just have to adapt and just focus on what goes on between the boards. That's really what's in our control.”

“It's too bad,” Toronto defenceman Morgan Rielly added. “It's a really tough situation.”

The Leafs are coming out of a COVID-19 outbreak that, at its height, forced 14 players and seven staff members, including Keefe, into the league's virus protocol.

Toronto thumped the Ottawa Senators 6-0 in both teams' return to action following the NHL's extended holiday schedule pause in response to the fast-spreading Omicron variant, and appeared to be out of the woods before Matthews and assistant coach Dean Chynoweth produced preliminary positive results Monday.

“Not ideal ... we've had games without him over the last few years,” Tavares said of potentially being without Matthews. “You're never going to replace the type of player that he is, the impact he makes.

“But everyone can look to do a little more to make the most of the opportunity.”

The Leafs, who beat the Oilers 5-1 in Edmonton on Dec. 14 before their outbreak in a game Hyman missed due to injury, will be looking to continue what they started Saturday before heading out on the road, while the Oilers are 2-8-2 over their last 12 following Monday's 4-1 loss in the Big Apple after beginning the campaign 16-5-0.

“You have to build your way out of it,” said Hyman, a Toronto native. “It's such a fine line in hockey. When things are going well in the beginning, you were finding ways to win - probably winning games we probably shouldn't win. And then now we're probably losing games that we should be winning.

Tippett, however, didn't sound all that confident in his goaltending in the wake of Monday's setback. He ripped Mikko Koskinen for a couple of bad goals, including a gift on New York's opener off a turnover following some terrific Edmonton pressure at the other end.

“He had a tough night,” the coach said when asked about those comments Tuesday. “We played solid a lot of that game - really solid.

“Goaltender gives up a bad one, it's front and centre. They pick that position when they're a young guy ... they deal with it.”

The temperature has been turned up on Tippett in recent weeks with the Oilers, who were swept in the first round of last spring's playoffs and bounced from the NHL's 2020 bubble in the qualifying round, struggling to gain traction after that fast start despite possessing the league's leading scorers in McDavid and Leon Draisaitl.

“At my age, that stuff doesn't bother me a bit,” said the 60-year-old. “I've been around too long. And I'm with (Edmonton general manager) Ken Holland, who's a good man. I don't listen to any outside noise.

“The house is burning for you guys. Inside the coaches' office ... we're trying to put fires out.”

That will have to happen Wednesday in a cavernous building because of fresh COVID-19 rules, potentially without two of his four centres - including the best player in the world - against a team that could also be minus its talisman.

Not exactly what anyone had in mind.

“Reality is we're still in this,” Hyman said of the pandemic. “Hopefully, we're coming out of it now and things can get back to normal soon.”

This report by The Canadian Press was first published Jan. 4, 2022.