No sleep? No problem: VanVleet continues to amaze since birth of son 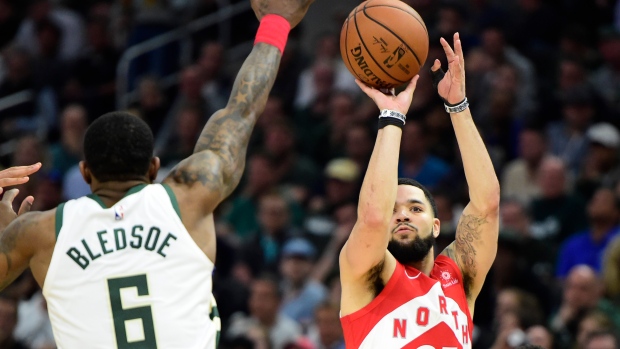 Toronto Raptors guard Fred VanVleet (23) shoots over Milwaukee Bucks guard Eric Bledsoe (6) during second half action in Game 5 of the NBA Eastern Conference final in Milwaukee on Thursday, May 23, 2019. THE CANADIAN PRESS/Frank Gunn

MILWAUKEE -- Fred VanVleet's breakout performance in Game 5 of the NBA Eastern Conference final had the city of Toronto buzzing, but for the Raptors point guard it was just another crazy night in a whole string of them.

VanVleet provided a huge boost of scoring off the bench with a playoff career-high 21 points Thursday night as the Raptors posted a 105-99 win at Milwaukee and moved within a win of their first ever appearance in the NBA Finals.

The win, though, is just another highlight of a joyful, tiring week that started when VanVleet and longtime girlfriend Shontai Neal welcomed a son, Fred Jr., on Monday -- one day after the Raptors pulled out a nervy 118-112 double-overtime win at home to cut the Bucks' lead in the series to 2-1.

The surprising news that Fred Jr. was on his way -- his due date was May 31 -- had VanVleet scrambling to get back to his hometown of Rockford, Ill., in time for his son's birth.

"Monday morning I thought I had a nice day off at home in Toronto, I got the call that her water broke, and I started running around trying to find if I could get on a plane," VanVleet said after Thursday's game.

After spending time with his family, VanVleet managed to fly back to Toronto in time for Toronto's 120-102 win in Game 4. He had what was then his best performance of these playoffs in that game, scoring 18 points and hitting all three of his three-point attempts. VanVleet's offence had all but abandoned him up until that point, and he credited his rediscovered stroke to his son.

After flying back to Milwaukee with the rest of the team on Wednesday, he drove to Rockford and spent the night in the hospital.

He was there to see his girlfriend and son get discharged on Thursday morning, drove back to Milwaukee in the afternoon, had a nap and "and laced them up again here for Game 5."

"So it's been a frantic week, but that's what makes all this stuff worth it," said VanVleet, who also has a daughter with Neal.

If he was tired on Thursday night, he didn't show it. The undersized but scrappy whose personal motto is "Bet On Yourself" lived up to those words, oozing confidence as he drained seven of his nine three-pointers, shooting without hesitation.

"Obviously it's turned around for me a little bit these last two games," VanVleet said. "I'm getting better looks, more open looks, and as you make them, your teammates start to look for you more and more and the game kind of opens up all at once.

"Just staying confident, staying in there ready to knock them down when I get the opportunity, and just staying locked in."

The Raptors had been looking for secondary scoring to back up superstar Kawhi Leonard and team motor Kyle Lowry. For at least two games, they have found it in a proud father running on fumes.

"To come out with a performance like that on the road, it shows the mental toughness," Lowry said. "It shows just how much of a professional he is. It was an unbelievable performance by him, and he made some big shots for us."