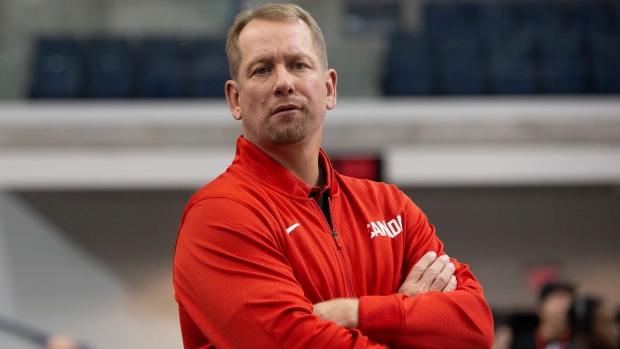 Two days before they step on the court for their first game in more than four months, the Toronto Raptors didn't want to take it easy Wednesday.

So after a casual poll of players revealed they wanted to go harder ahead of Friday's scrimmage against the Houston Rockets, coach Nick Nurse shredded his practice plan that had called for a light day.

“I just flipped it and decided that we'd go play a little bit more today and condition and compete today just after going around and talking to some of the guys in their pre-practice,” Nurse, who wore a facemask with a monogrammed “Coach Nurse.”

“I don't do it very often where I totally rip up the practice schedule or go on a completely different script, (but) I just called the coaching staff together and said 'follow my lead today, I'm going a different direction' and I did.”

The NBA's restart, with its marketing motto of “Whole New Game,” tipped off with four games on Wednesday. Each team will play three scrimmages before the real restart begins on July 30. The Raptors open Aug. 1 versus the Los Angeles Lakers in their first real game since the global pandemic shuttered the league on March 11.

Nurse is excited to be back pacing the sideline.

“I certainly miss it,” the coach said. “But I think it's such a part of your nature. I always say that the ball goes up and your competitive juices kick in. I think there may be a little bit of getting used to that again, but I don't think so. It's hundreds, thousands of games you've been through as a coach in your life, or as a player. And you just kind of fall right back into it pretty quickly, you know?”

The four-month layoff has been the longest in most players' careers, and so the first scrimmages for each teams will feature 10-minute quarters rather than the regular 12 minutes per quarter. Injury is a big risk in any restart after such a long break.

Nurse knows he might have to control the enthusiasm of some players.

“I guess I'm just going to have to communicate that clearly,” the coach said. “I would imagine I ultimately have got to make the subs and monitor the minutes, right, and go in there with a real loose kind of preconceived notion of what I'm going to do. . . I think being real careful, we certainly have to use these scrimmage games as a conditioning tool, a rhythm type thing and an opportunity thing to get guys out on the floor and see where we're at.”

The first scrimmage in particular, Nurse said, will give him a true indication of where the Raptors - who only began practising on July 11 after a couple of weeks of one-on-none work - are at in terms of conditioning.

While Nurse has said the key to success in the restart will be adaptability, it hasn't been easy.

They've tried to maintain as close to a regular schedule as possible, meaning weights, stretching and shooting before practice starts in the allotted three-hour time block. When they're in Toronto, players can remain in the gym to work on specific skills. Serge Ibaka is often one of the last players to leave the gym.

“But. . . as soon as practice is over every day, Serge (Ibaka) comes right to me and gets the watch out and says 'How much time do we have exactly?”' Nurse said. “And like today I said 'You've got 32 minutes, Serge.”'

Ibaka was cranky that speakers that addressed the team at the beginning of practice “ate into my time.”

Nurse said there are also shooting allotments in the evening that each team needs to sign up for to reserve a court.

Ibaka, who was having an excellent season when the season shut down stepping up in the absence of injured Marc Gasol, was asked what he missed most about playing.

A theme of the NBA's restart is to amplify social justice messages, and Ibaka and Terence Davis used their media availability Wednesday to speak about Breonna Taylor, the 26-year-old who was fatally shot by police on March 13.

This report by The Canadian Press was first published July 22, 2020.