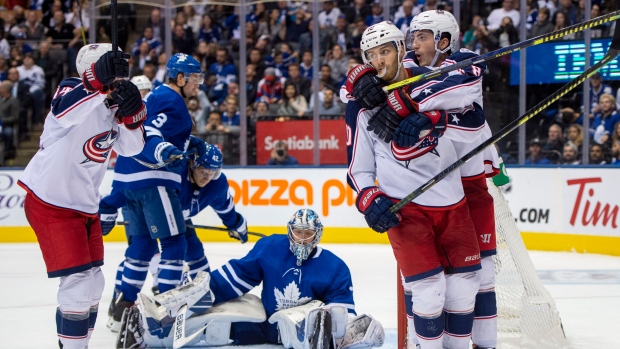 TORONTO - Gustav Nyquist scored on a penalty shot at 1:57 of overtime as the Columbus Blue Jackets defeated the Toronto Maple Leafs 4-3 on Monday.

Riley Nash, Pierre-Luc Dubois and Alexander Wennberg scored in regulation for Columbus (4-3-2). Nick Foligno chipped in with two assists for the Blue Jackets, who got 28 stops from Joonas Korpisalo.

Auston Matthews, with a goal and an assist, William Nylander and Kasperi Kapanen also scored for Toronto (5-3-2), while Andreas Johnsson and Jake Muzzin added two assists each. Frederik Andersen made 34 saves.

Andersen stopped Dubois on a breakaway seconds into overtime before Nyquist was hooked by Mitch Marner on another one-on-one chance at the end of a long shift for the Leafs.

With fans inside Scotiabank Arena voicing their displeasure, Nyquist moved in and beat Andersen under the glove for his second goal of the season.

It was the first time in Leafs history that they lost an overtime game on a penalty shot.

Playing their second game since captain John Tavares suffered a broken finger that will keep him out until at least early November, the Leafs were far from their best with a number of sloppy sequences at both ends of the rink, but led 3-2 after 40 minutes.

Columbus tied it up, however, on a power play at 10:09 of the third when Wennberg scored his second after Leafs defenceman Morgan Rielly blocked Zach Werenski's initial shot.

Andersen, who recovered nicely after allowing goals on the visitors' first two shots of the game, stopped Cam Atkinson on a breakaway with under four minutes left in regulation to force overtime.

Nylander put the Leafs ahead 3-2 with 14.5 seconds left in the middle period when Matthews grabbed a loose puck in the slot and saw his initial shot stopped by Korpisalo. Johnsson heeled the rebound and it found Nyander, who buried his third goal of the season to snap a four-game point drought.

Despite his early blemishes, Andersen was the story for Toronto most of the period.

The Leafs netminder stopped Ryan Murray from the slot early in the second and then stacked the pads to deny Dubois later on after a Muzzin turnover before Nylander pushed his team ahead.

Andersen made 43 saves in Saturday's thrilling 4-3 overtime victory against the Bruins at Scotiabank Arena, but No. 2 goalie Michael Hutchinson is expected to get the start in the second half of a back-to-back - and Toronto's third game in four nights - in the rematch Tuesday at Boston's TD Garden.

Coming off consecutive 3-2 overtime losses to the Chicago Blackhawks and New York Islanders, the Blue Jackets jumped out to that 2-0 lead in front of a stunned Scotiabank Arena crowd.

Nash got things started with Columbus killing a penalty just 2:31 in when he stole the puck from Marner in Toronto's end. The centre fed Foligno in front, and he passed right back to Nash, who made no mistake for his first.

The visitors then went up by two at 5:52 when Dubois fought off Matthews coming out of the corner and stuffed his fourth past Andersen.

The Blue Jackets - who made the second round of the playoffs for the first time in franchise history last spring before losing Artemi Panarin, Sergei Bobrovsky and Matt Duchene in free agency - then went on the power play with a chance to go up 3-0, but Leafs were the ones to capitalize.

Columbus turned the puck over at the offensive blue line, with Marner making amends for the early gaffe by feeding Kapanen on a 2-on-1 short-handed break for his second at 11:25.

Toronto, which beat Columbus 4-1 in the Blue Jackets' home opener back on Oct. 4, got its second man advantage, but Korpisalo was there to rob Matthews with his pad and blocker, Rielly with the shaft of his stick before finishing with another pad save on Johnsson.

The Blue Jackets came close to going up 3-1 after hemming the Leafs in their own zone late in the period, but Toronto survived and pulled even with 38.2 seconds remaining when Johnsson, who left Saturday's victory after blocking a shot, found Matthews at the lip of the crease for his eighth.

Notes: Columbus winger Josh Anderson returned to the lineup after missing the last six games with an upper-body injury suffered Oct. 5. ... Attendance was 18,891.