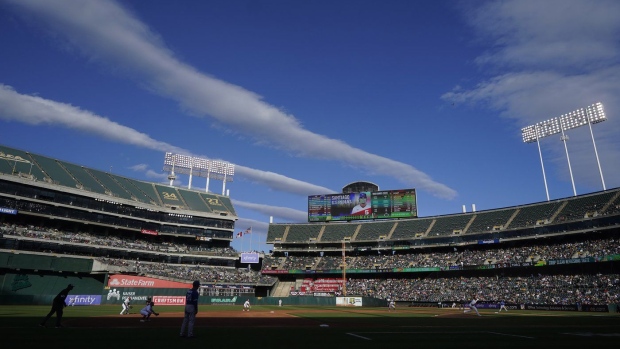 Oakland Athletics' Cole Irvin, bottom right, pitches against the Toronto Blue Jays during the third inning of a baseball game in Oakland, Calif., Monday, July 4, 2022 Oakland police are investigating after fans were injured at Monday night's game between the Athletics and the Toronto Blue Jays by "celebratory gunfire." THE CANADIAN PRESS/AP-Jeff Chiu

OAKLAND, Calif. - Oakland police are investigating after fans were injured at Monday night's game between the Athletics and Toronto Blue Jays by “celebratory gunfire.”

In a statement, the A's said officers were notified of a possible shooting in RingCentral Coliseum following a post-game Fourth of July fireworks display.

The A's said an initial investigation found three fans were struck by bullet fragments “from what appeared to be celebratory gunfire occurring throughout the city.”

A fourth person later walked into a local hospital on their own. All four have non-life-threatening injuries, the team said.

The A's are offering a US$20,000 reward for information leading to an arrest.

Oakland defeated Toronto 5-1 Monday before a season-high crowd of 24,403 to kick off a three-game series between the teams.