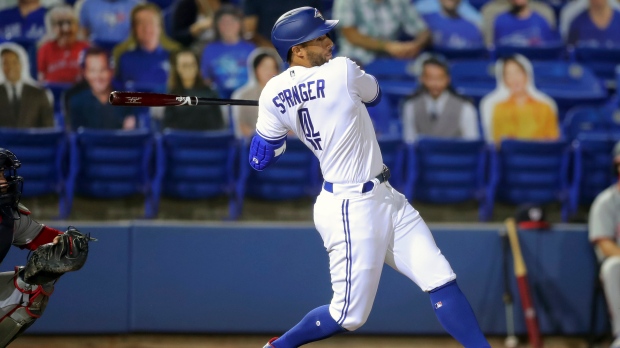 TORONTO - Blue Jays outfielder George Springer is not expected to be ready to return to Toronto's lineup when his latest stint on the 10-day injured list ends May 13, general manager Ross Atkins said Thursday.

Also Thursday, the Blue Jays activated left-hander Hyun Jin Ryu off the injured list to start an afternoon game against Oakland. Ryu left an April 25 start at Tampa Bay because of a strained right gluteal muscle.

Springer landed on the injured list Wednesday after aggravating his strained right quadriceps, with the move retroactive to May 3. Springer had been out of the lineup for two days before undergoing an MRI Wednesday morning.

Springer signed a team-record $150 million, six-year deal with the Blue Jays this off-season but didn't make his season debut until April 28 because of two separate injuries, first a strained oblique muscle and later the quadriceps injury.

Atkins said Springer reported feeling better Thursday than the previous day, but said the 2017 World Series MVP with Houston is “obviously very frustrated” by his limited action so far this season.

Springer hit two home runs in Saturday's win over Atlanta, his third game since returning, but also felt pain while running out a groundball. He left Sunday's game after three at-bats due to fatigue.

“All the information we had at the time suggested it was safe to take the next step and, unfortunately, we had a setback,” Atkins said of Springer's aborted return from injury.

Springer will have a “minimal workload” as he attempts to recover from the quad strain, Atkins said.

Right-hander David Phelps was placed on the 10-day injured list Thursday because of right lat strain. Phelps came in to pitch the eighth inning in Wednesday's victory over the Athletics but had to leave after feeling pain while warming up.

Atkins said infielder Joe Panik had an MRI Thursday after feeling calf pain while running out a grounder Wednesday. Atkins also said catcher Alejandro Kirk is expected to miss at least four weeks, and possibly more, because of a left flexor strain. Kirk was placed on the 10-day injured injured list Sunday.