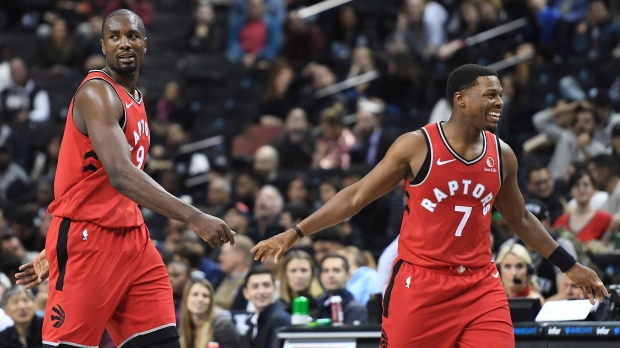 UNIONDALE, N.Y. - OG Anunoby scored 18 points and Toronto had nine players score at least nine points as the Raptors rolled past the Brooklyn Nets 123-107 on Friday in NBA pre-season action.

Fred VanVleet scored 16 points and handed out eight assists for Toronto, which got 15 points and 11 rebounds from Serge Ibaka. Kyle Lowry got his first - and only - action of the pre-season, scoring nine points in 26 minutes.

Kyrie Irving got his first extended action of the pre-season for Brooklyn, scoring 19 points in 25 minutes. Irving played only 66 seconds in the Nets' first game against the Los Angeles Lakers in China last week before aggravating a facial fracture and not playing on the remainder of that trip.

Some fans at the game wore shirts, held signs and chanted in support of Hong Kong during the Nets' first game since returning from China.

One sign was critical of Nets owner Joe Tsai, co-founder of the Chinese e-commerce giant Alibaba, who had written a Facebook post explaining why Houston general manager Daryl Morey's tweet in support of Hong Kong protesters was upsetting to Chinese.