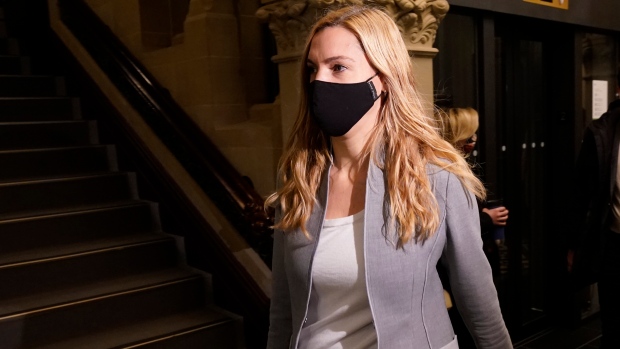 OTTAWA - Athletes representing Canada in the Beijing Winter Olympics next month are being told to take extra precautions against Chinese cyber surveillance, including the danger of electronic devices being infected with spyware.

Sports Minister Pascale St-Onge said the government has been “working closely” with the Olympic and Paralympic committees, which are briefing athletes on security in China, including on the risk of being hacked.

The minister said the Canadian Olympic and Paralympic Committees have a “solid” plan in place to protect athletes, including from espionage by the Chinese.

St-Onge said that, for security reasons, operational planning to protect athletes could not be disclosed.

“We are well aware of the espionage and all these issues with China,” the minister said.

The International Olympic Committee is giving phones and SIM cards to all athletes, including the Canadian team, to use while they are there.

She said the government was ensuring that Canadian athletes have consular services available in China if they need help.

She said “all other security aspects, whether it is espionage or others” are being covered by the training and briefings by the Olympic and Paralympic committees.

“We are there to offer every support and intelligence that we have,” she said. “We have been working closely and I can tell you that the plan is solid.”

She said strict precautions were also in place to protect athletes, coaches and support staff from COVID-19 while they are in China, with athletes placed in a bubble.

St-Onge said the eyes of the world will be turned toward China during the Olympics and Paralympics, which start in three weeks' time.

As with all Olympic hosts, the Chinese will be responsible for making sure that athletes are safe and secure, she said.

The minister said she thought Canada had made the right decision to join other countries, including the U.S., in a diplomatic boycott of China over human-rights concerns. Politicians and diplomats will not attend the games, but athletes will compete as usual.

“We have taken the right decision. There are other countries that have adopted the same strategy. The human rights issue is an ongoing issue for sure and it is not going to be resolved only with that or with the Olympics taking place or not,” she said.

Nicole Watts, public relations manager for the Canadian Paralympic Committee, said cybersecurity was part of its planning for the games.

The Canadian Olympic Committee said in a statement “it takes cybersecurity seriously.”

“We work with cybersecurity experts, government agencies, the International Olympic Committee, and other national Olympic committees to ensure we have appropriate plans for every Games environment we work in,” a spokesman said.

“We've reminded all Team Canada members that the Olympic Games present a unique opportunity for cybercrime and recommended that they be extra diligent at the Games, including considering leaving personal devices at home, limiting personal information stored on devices brought to the Games, and to practice good cyber hygiene at all times.”

St-Onge, who was sworn in as sports minister in October, said the safety of athletes and people participating in sports in general was a priority for her.

“We need to prevent and address abuse, mistreatment, and harassment in sport, which engages so many Canadian youth. This will be the focus of my first year in this role,” she said.

She said finding ways to keep kids and adults active during the pandemic was a key challenge, with restrictions on contacts and how many people can participate in sports.

The minister is preparing to announce an $80-million injection in community sport to “help get youth active again” and make sure that local clubs - many of which have been forced to close their doors because of COVID-19 - can keep going.

“We need to find solutions to keep our kids and youth active and help the Canadian population be active and practise sport. We know how important it is for mental health and for physical health and the past two years have been very difficult,” she said.