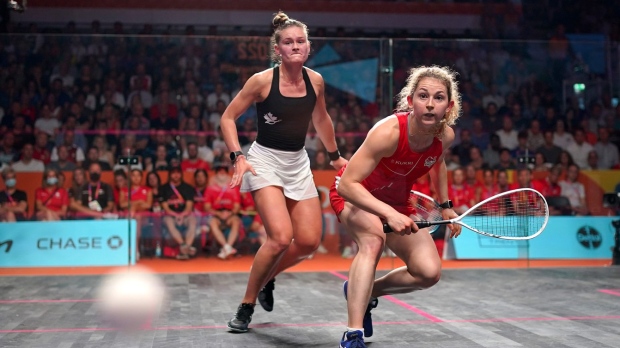 Canada's Hollie Naughton in action against England's Georgia Kennedy (right) in the women's singles gold medal squash match at the University of Birmingham Hockey and Squash Centre on day six of the 2022 Commonwealth Games in Birmingham, Wednesday August 3, 2022. Naughton, who became the first Canadian woman to ever climb the medal podium in squash at the Commonwealth Games, will carry Canada's flag in the closing ceremony.THE CANADIAN PRESS/Zac Goodwin - Press Association

Days after making history at the Commonwealth Games, squash player Hollie Naughton was chosen to carry Canada's flag into the closing ceremony.

Marching behind her: a Canadian team that produced the country's best medal tally in 20 years.

"I keep using this word honoured but I'm not quite sure what else covers it," Naughton said. "I have felt extremely honoured to compete for Canada here at my first Commonwealth Games, to make history in the squash community and now the biggest of all, leading Team Canada in the closing ceremony.

"If three weeks ago you would have told me this would be what my Games looked like, I wouldn't have believed you. What an experience this week has been, this will take a while to sink in but for now let's shut this Games down!”

Canada finished the Games with 92 medals, including 26 gold, topping the 82 medals won four years ago in Gold Coast, Australia. It was Canada's best result since the team's 117-medal haul in 2002 in Manchester, England.

Canada finished third best out of 72 nations in both total and gold medals won. Australia led the way with 178, including 67 gold, ahead of England with 176 medals and 57 gold.

Michelle Li won Canada's final medal, a silver in badminton on Monday, hours before the closing ceremony. The 30-year-old from Toronto dropped a 2-0 decision to Venkata Sindhu Pusarla of India in the final.

"I'm happy to bring home the silver, I'm happy I got a medal, I'm a little disappointed it's not gold," said Li, who won gold at the 2014 Games in Glasgow. "But there's a lot to learn from and take away from today."

Naughton became the first Canadian woman to climb the Commonwealth medal podium in squash, winning silver. The 27-year-old was born and raised in Barnsley, England, where she began playing squash at age seven.

Naughton was disappointed with her 3-1 loss to England's Georgina Kennedy in the gold-medal game, but was emotional when asked about the history she made.

"You dream of making these milestones for your country, and to walk away with being the first-ever female medallist in squash is an unbelievable achievement,'' she said. "Hopefully in four years time I can make it a gold.''

Naughton, who calls Mississauga, Ont., home, is a three-time Canadian Women's Open champion. She was part of the Canadian squad that won team silver at the 2015 Pan American Games in Toronto.

Several big names were missing from Canada's team at the Games, including swimmer Penny Oleksiak and sprinter Andre De Grasse.

Monday's closing ceremony was expected to draw a live audience of 30,000 fans at Alexander Stadium, and include a formal handover to the state of Victoria, Australia, which will host the 2026 Commonwealth Games.