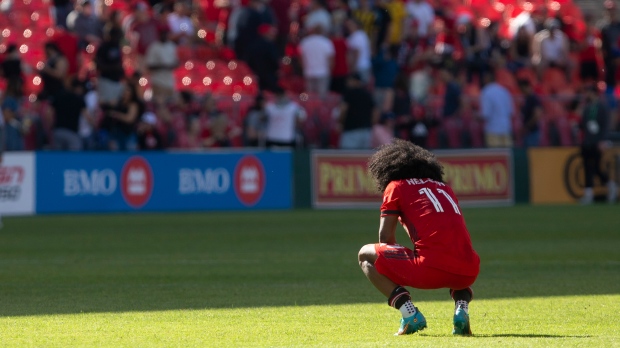 Toronto FC's Jayden Nelson reacts at the final whistle after his team loose 1-0 to a last minute goal from Orlando City's Kyle Smith in MLS action in Toronto, Saturday, May 14, 2022. THE CANADIAN PRESS/Chris Young

TORONTO - The losses are mounting for Toronto FC. So is the frustration.

For the second week in a row, Toronto (3-7-2) conceded a late goal in losing 1-0 to Orlando City SC. Substitute Kyle Smith's header off a corner in the 92nd minute consigned TFC to a fifth straight MLS loss.

Last Sunday, Toronto succumbed to a 90th-minute Tosaint Ricketts goal in a 1-0 loss in Vancouver.

“Sometimes when you learn lessons, you learn them the harsh way,” lamented Toronto goalkeeper Alex Bono.

Substitute Alexandre Pato, whose soccer resume includes AC Milan, Corinthians and Chelsea, delivered an accurate corner kick that proved to be the dagger. Toronto forward Ayo Akinola was stationed at the near post but just missed getting his head to the ball, allowing Smith to flick it into the goal.

“Yeah, it hurts,” said Bono. “Especially being the second game in a row where we give up a shutout really late. That's definitely painful for me, I know, and for the rest of the guys â€¦ we work the whole 90 minutes and then it comes down to one play and we just don't quite execute.”

Orlando (6-4-2) notched its sixth shutout of the season as it took over top spot in the East, at least temporarily, following its first-ever win at BMO Field (1-4-3).

Orlando outshot Toronto 17-8 (6-2) in shots on target. Still Toronto likely deserved the draw in a game where a goal seemed unlikely, with errant shots and defenders getting their bodies in the way.

Toronto has now been shut out in three straight games with its last goal coming April 30 in a 2-1 loss to visiting FC Cincinnati. TFC's scoring drought stands at 295 minutes.

Akinola was the first defender on the corner with a teammate nearby as the second line of defence.

“One of our big priorities is to not let balls come through that front zone. So we paid the price,” Bradley said.

The Toronto coach also noted that 19-year-old Deandre Kerr should have rethought an attempted flick that went awry on a Toronto throw-in and triggered the Orlando attack that led to the game-deciding corner.

“We've got to run a long way at that point in the game to put out a fire and it turns into a corner and then ultimately that's how they score,” he said. “Look, it doesn't take away from Deandre, what he's given us, how he's growing. It's a moment in the game.”

For Bradley it's another learning moment for a young player.

Toronto's last league shutout was a 0-0 draw at Colorado on Sept. 25. Its last clean sheet at BMO Field was a 1-0 win over Vancouver on Aug. 21, 2020, although it registered a 2-0 “home” victory over Columbus on May 12, 2021, in a game played in Orlando due to pandemic-related travel restrictions.

Bono, while saying he is more interested in wins than any other statistic, is feeling the lack of shutouts.

“It keeps me up at night. It really weighs on me that we give up goals the way we do,” he said.

“I live on shutouts, so the fact that we haven't had one in a while is slowly killing me,” he added.

According to Opta, TFC has kept one clean sheet in its last 42 league matches, the longest span without at least two clean sheets in league history.

Bono said there was discussion about taking two days off after the game to “clear our heads.”

Toronto's current slide marks the club's third losing streak of at least four matches since the start of last season. Before that, Toronto hadn't lost four or more in a row since early 2015.

TFC had chances as the game wore on with Akinola coming close in the 81st minute, only to see his on-target shot bounce off a body.

Orlando bounced back from a 4-1 loss at Montreal in league play last weekend, defeating the Philadelphia Union 2-1 mid-week in U.S. Open Cup play. Orlando has not lost consecutive matches since a run of four straight defeats in September 2021.

Once again, Toronto's lineup was depleted.

Mexican centre back Carlos Salcedo, one of TFC's designated players, returned after a two-game absence in health and safety protocols.

But Spanish playmaker Alejandro Pozuelo was a late scratch after feeling some discomfort following training Friday.

Pozuelo, another DP and former league MVP, had started all 11 previous league outings, taking part in all but 26 minutes.

Midfielder Ralph Priso returned from a one-game suspension resulting from a red card in Cincinnati. He gave way to Akinola at the half. Jordan Perruzza, in his first career start, also slotted into a starting 11 that featured seven Canadians.

Bradley could only manage a six-man bench that included 23-year-old Paul Rothrock and 17-year-old Adam Pearlman, both signed to short-term loan agreements earlier in the day from Toronto FC II.

It was 25 degrees Celsius on a glorious sunny afternoon before an announced crowd of 26,146 at BMO Field.

Defence remains an issue for Toronto, which ranked 27th in the 28-team league in averaging 2.00 goals a game before Saturday. Only San Jose, at 2.30, had conceded more.