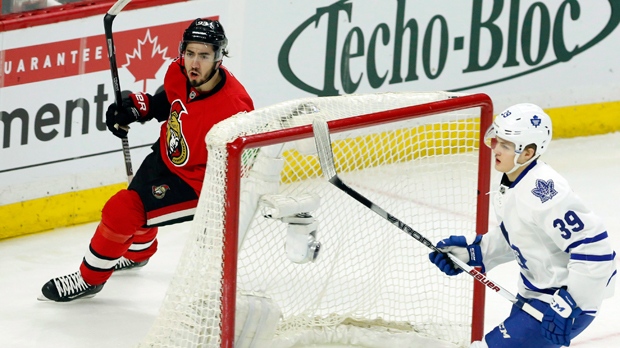 OTTAWA -- The Ottawa Senators knew anything less than a win would be unacceptable Saturday night.

While a 4-0 victory over the Toronto Maple Leafs won't make up for all that ails this team right now, it was definitely needed. Ottawa snapped a three-game losing streak and saved face after an ugly 6-2 loss to the Florida Panthers on Thursday night.

"The way we lost last game we knew it was a big one," said Zack Smith. "It was a character test. It's obviously not over yet. We have to keep performing like that, but it was definitely a step in the right direction."

While this current edition of the Maple Leafs -- filled with minor league callups, most of whom are NHL rookies -- can hardly compare to the Panthers, the Senators knew things would get ugly if they put up another sub-par performance.

"Much better game-management, puck management," said Ottawa head coach Dave Cameron. "The only thing (Saturday) that I would have liked to seen more of was shots at the net. I still thought we passed up too many shots looking for the grade-A chance, but overall happy with our puck management, game management and what we limited Toronto to."

Smith, Mika Zibanejad, Cody Ceci and Mark Stone scored as the Senators (32-30-8) swept their season series with Toronto. Craig Anderson made 29 saves for his fourth shutout of the year and Jean-Gabriel Pageau contributed adding three assists.

Garret Sparks, making his third straight start for the Leafs (22-34-11), stopped 13 shots. Coincidentally, Sparks used to work for Anderson at his goaltending school in Chicago.

"I didn't think we were competitive enough," said Leafs coach Mike Babcock. "I thought they were ready to go in the first period and obviously the first two shifts of the second and the third we gave up goals.

"I don't think we made it very hard on Anderson at all."

Despite the number of new faces on the young Toronto roster, a good portion of the 18,557 on hand at Canadian Tire Centre were cheering for the Maple Leafs.

Ottawa opened the scoring and dominated for the better part of the game.

Toronto had a few good scoring chances, but was never really able to apply any sustained pressure.

"As a team we need to do a better job getting pucks in and playing our game down low and trying to create things off the cycle," said Morgan Rielly. "(Saturday) there was just too much back and forth."

Leading 2-0 to start the third, Smith scored his 21st of the season as he picked up a loose puck out front and roofed it. Smith has six goals and three assists in his past eight games.

Stone made it 4-0 at 15:21 as he initiated the play with a steal at centre and then took a great feed from Pageau for an easy goal.

Smith, Pageau and Stone have been the Senators best line for the past few weeks and continue to contribute on a regular basis.

"It's just three guys playing simple hockey and finding chemistry," said Stone, who has 11 goals and 13 assists in his last 20 games. "I think when you find that chemistry it's easy to come to the rink and be comfortable on the ice and I think if you look at those two guys they're comfortable with me and I'm comfortable with them."

Ceci gave the Senators a 2-0 lead 19 seconds into the second working the give-and-go with Stone to beat Sparks off his backhand.

Ottawa opened the scoring at the five-minute mark as Mike Hoffman fed Zibanejad a great pass who then faked a slapshot and beat Sparks through the legs.

Notes: LW Matt Puempel and D Patrick Wiercioch were a healthy scratch for the Senators. LW Milan Michalek and C Colin Greening made their first appearance in Ottawa since being traded to Toronto Feb. 9. Toronto's Rinat Valiev made his NHL debut.