Over first quarter of season, Blue Jays' strong pitching has made up for middling offence 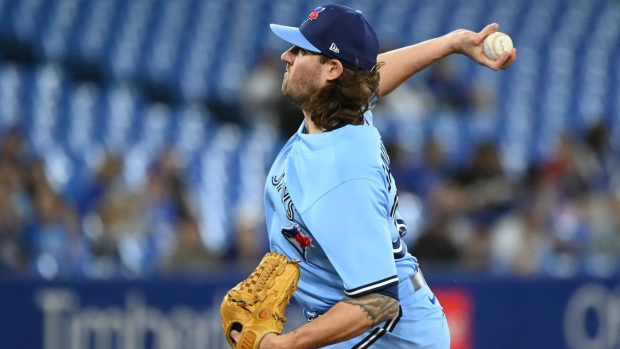 Toronto Blue Jays’ Kevin Gausman pitches in the first inning of an American League baseball game against the Seattle Mariners in Toronto on Wednesday, May 18, 2022. Several one-run victories by the Toronto Blue Jays in April have helped offset a May slide that has left the team hovering near the .500 mark as the 40-game post arrives this weekend. THE CANADIAN PRESS/Jon Blacker

TORONTO - Several one-run victories by the Toronto Blue Jays in April have helped offset a May slide that has left the team hovering near the .500 mark as the 40-game post arrives this weekend.

Strong pitching helped Canada's lone big-league team to a 15-8 start, but a middling offence has seen the club sputter during a current 5-10 stretch.

A weekend visit by the last-place Cincinnati Reds could be just what the 20-18 Blue Jays need to get back into contender form.

Here are five things of note now that one quarter of the season is nearly complete.

The loss of American League Cy Young Award winner Robbie Ray to free agency has been blunted by the arrival of Kevin Gausman, who will be in the mix for the 2022 pitching honour if he maintains his current pace.

Gausman, who signed a US$110-million, five-year contract last December, has been as advertised over his eight starts.

The 31-year-old right-hander is 3-3 with a 2.52 earned-run average, 57 strikeouts and just three walks. He gave up a solo homer on Wednesday to end a homerless streak at 57 innings dating back to last season.

Gausman has helped anchor a Toronto rotation that leads the American League with 16 quality starts this year.

Hands up if you thought Santiago Espinal would be one of Toronto's most feared hitters this season.

He leads the team (among regulars) with a .289 batting average and is third with a .786 OPS (on-base plus slugging), just behind the big bats of Vladimir Guerrero, Jr., and George Springer.

Bigger things were expected from a lineup loaded with offensive weapons. but the meat of the order has yet to find a steady rhythm.

Bo Bichette led the AL in hits last season but is well off his 2021 pace. Guerrero's numbers are down from his MVP finalist campaign as well.

Matt Chapman has been solid defensively at third base but he's batting just .185. Lourdes Gurriel, Jr., (.227) and Raimel Tapia (.225) have also struggled at the plate.

Blue Jays starter Alek Manoah has picked up where he left off after a stellar rookie season with Toronto.

Entering Thursday's games, the six-foot-six 285-pound right-hander was fifth in the major leagues with a 1.71 ERA and 0.88 WHIP (walks and hits per innings pitched).

The lone blemish on Manoah's 4-1 record came last Sunday after he allowed just one earned run over six innings in a 3-0 loss to Tampa Bay.

A recent gastrointestinal issue has kept closer Jordan Romano on the bench in recent days. It also gave him a needed break from a heavy workload.

Romano, who made 16 appearances in just over five weeks, was the AL reliever of the month for April.

The Markham, Ont., native leads the AL with 12 saves. He converted a franchise-record 31 straight save opportunities before finally blowing a save on April 24.