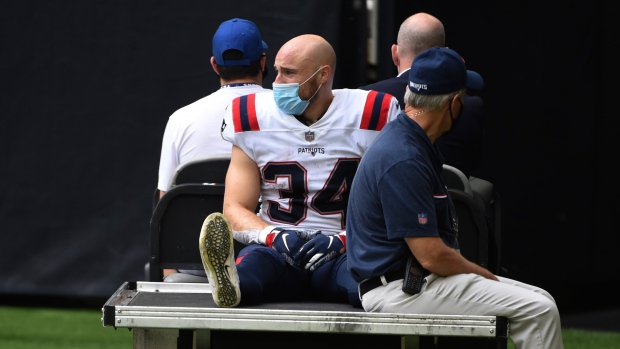 New England Patriots running back Rex Burkhead (34) is taken off the field by cart after an injury during the second half of an NFL football game against the Houston Texans, Sunday, Nov. 22, 2020, in Houston. (AP Photo/Eric Christian Smith)

FOXBOROUGH, Mass. -- Patriots running back Rex Burkhead says his recent knee injury will keep him sidelined for the rest of the season.

In an Instagram post on Tuesday, Burkhead wrote that he looks forward to "coming back better than ever in 2021." The proclamation comes after he was carted off the field in the third quarter of Sunday's 27-20 loss at Houston following a knee-to-helmet collision with Texans cornerback Bradley Roby.

The rest of his Patriots teammates kneeled while Burkhead remained down on the field, in obvious pain. After stopping by the sideline medical tent, he left the field and did not return.

After the game coach Bill Belichick confirmed Burkhead suffered a knee injury, but said they would have to wait for confirmation on the severity from the medical staff. He didn't travel back with the team and stayed in Houston on Sunday night.

Burkhead, who scored the game-winning touchdown in the 2019 AFC championship game against Kansas City, was having one of the best years of his career, with a combined 466 yards and six touchdowns rushing and receiving.

His injury is the latest blow to a Patriots running back group that has already had to make several adjustments.

Damien Harris has been the Patriots top running back this season, but he missed the first three games of the season with a hand injury. Sony Michel was just activated from injured reserve last week after being sidelined since Week 3 because of a quad injury. Veteran James White also missed two games following the death of his father.