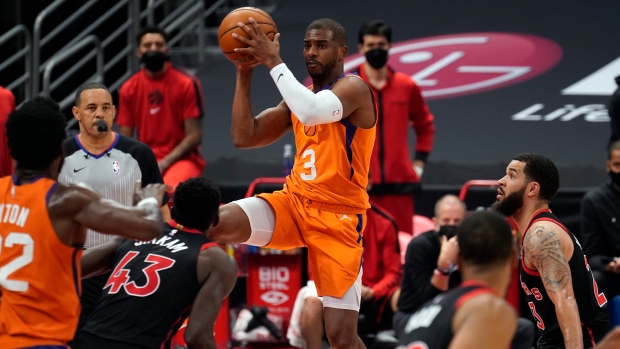 Phoenix Suns guard Chris Paul (3) looks to pass as he goes up against the Toronto Raptors during the first half of an NBA basketball game Friday, March 26, 2021, in Tampa, Fla. (AP Photo/Chris O'Meara)

TAMPA, Fla. - Chris Paul and Deandre Ayton each scored 19 points and the Phoenix Suns held off the Toronto Raptors 104-100 on Friday night despite not making a field goal in the last 3:50.

Paul and Devin Booker converted four free throws in the final 42 seconds. Booker had 16 points to help the Suns improve to 30-14.

Paul also had eight assists, and Ayton had nine rebounds and two blocks - the last block on Siakam in the final minutes.

Siakam had 26 points and 11 rebounds for the Raptors, and Fred VanVleet had 22 points. They fell two days after beating Denver to end a nine-game losing streak.

The Suns' biggest lead was 14 midway through the third quarter. Ayton's jump hook with 3:50 left put them up 100-91, but they never made another shot.

The Raptors played without DeAndre Bembry and Paul Watson Jr. after they entered the NBA's health and safety protocol Friday.

Thirteen members of the Toronto entourage, including seven players and head coach Nick Nurse, have missed games due to COVID since Feb. 26, and two games have been postponed.

Suns: At Charlotte on Sunday night.

Raptors: Vs. Portland in Tampa on Sunday night.