Penguins down Maple Leafs in Hall of Fame game 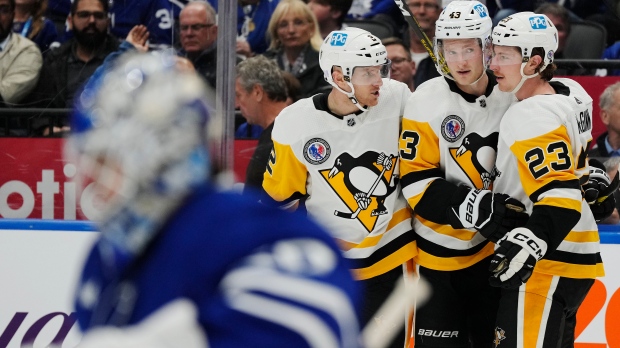 TORONTO - Brock McGinn scored the winner early in the third period as the Pittsburgh Penguins defeated the Toronto Maple Leafs 4-2 on Friday night.

Evgeni Malkin, with a goal and an assist, Jason Zucker and Jake Guentzel, into an empty net, provided the rest of the offence for Pittsburgh (6-6-2).

Casey DeSmith made 28 stops for the Penguins, who won their second straight following a seven-game slide.

William Nylander and Zach Aston-Reese replied for Toronto (7-5-3), which got 19 saves from Erik Kallgren and has dropped two in a row.

Henrik Sedin is also set to be enshrined Monday, but is recovering from a bout of COVID-19 and wasn't in attendance.

The Penguins snapped a 2-2 tie at 1:54 of the third when McGinn fired a shot that went through Toronto defenceman Mark Giordano's legs and Kallgren's five-hole for his third goal of the season.

The Leafs pulled their netminder with under two minutes left in regulation, but Guentzel iced it into an empty net with 12.1 seconds on the clock.

Toronto opened the scoring at 13:49 of the first when Aston-Reese, who played parts of five seasons in Pittsburgh, was quickest to a rebound to swat his second past DeSmith.

The Leafs appeared poised to take that lead to the intermission, but Malkin scored his sixth after Auston Matthews couldn't clear the defensive zone.

Chad Ruhwedel's point shot hit Toronto defenceman T.J. Brodie in front and fell kindly to Malkin, who took two penalties in the opening period, for him to bury the equalizer into a wide-open net.

Pittsburgh then went ahead 68 seconds into the second to close out a chaotic shift.

Leafs wingers Mitch Marner and Alexander Kerfoot couldn't connect on a 2-on-0 break before the puck went the other way, with Malkin finding Zucker on a no-look pass to fire home his fourth on Kallgren, who made his seventh appearance of the campaign with Matt Murray (abductor/groin) and Ilya Samsonov (knee) out injured.

The Leafs responded on their third power play late in the period when Nylander, who hit the post earlier in the man advantage, pumped a one-timer for his sixth past DeSmith off a nice fake from Morgan Rielly at 17:17.

With tears streaming down his cheeks, Sittler raised Salming's arm so he could wave to the crowd.

“He changed the view of Swedish hockey players,” Daniel Sedin said of the skill and toughness his countryman showed throughout a banner 17-year career Friday afternoon.

“He meant a lot to the Swedish players that followed him.”

This report by The Canadian Press was first published Nov. 11, 2022.