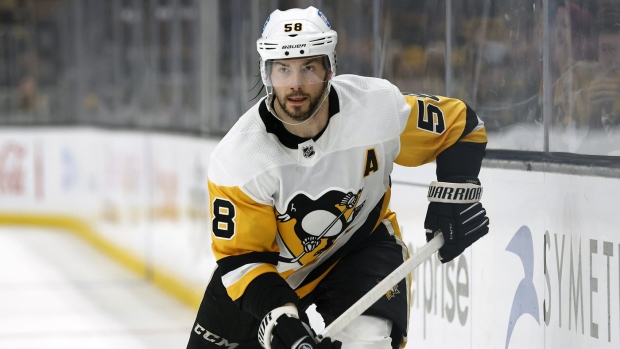 The 35-year-old Letang remains out indefinitely, with the club describing him as “day to day.”

Letang said he felt “pretty good” after being greeted by stick taps from his teammates when he skated onto the ice at the team’s practice facility. Still, the married father of two called the experience “scary,” particularly for his family.

“My kids, they don’t care if I’m a hockey player or not,” he said. “They care about having a dad. Same with my wife. She could care less about hockey. She knows there’s so much more. After hockey, there’s a long time and you want to be able to enjoy those moments with your family, with your kids.”

Letang missed more than two months in 2014 after his first stroke, which was caused by a small hole in the wall of his heart. The condition also led to the second stroke, which Letang suffered on Nov. 28 after dealing with a series of debilitating headaches.

This time, the symptoms have resolved themselves much more quickly, according to team physician Dr. Dharmesh Vyas, who described this stroke as “smaller” than the one Letang endured in 2014.

Letang began skating on his own just two days after the diagnosis and was cleared to return to practice on Thursday though both Letang and Vyas stressed they are in no rush for him to play in games.

“We don’t think this is accelerated in any way,” Vyas said. “We are taking all the right precautions to make sure that it is safe to go out and play and when that time comes we’ll let him go back to playing his sport.”

Pittsburgh coach Mike Sullivan said it was a “relief” to see Letang back at work.

“It’s a great visual that he’s making progress,” Sullivan said. “Our medical team that has monitored him extremely closely feels comfortable with some of the progress that he’s making and the steps he’s taken. Everyone was excited for him to join the group.”

Letang signed a six-year contract extension over the summer that will carry him into his 40s if he decides to play that long. Vyas said the data around strokes is “evolving” though it is unclear if Letang is now more susceptible to having additional strokes now that he's had a second one.

The six-time All-Star is cautious but optimistic.

"We’ve been through this," Letang said. "Me and Dharmesh have a clear understanding that we’re going to take all the time we need and make sure the research is possible and it’s no danger for me to keep going.”

The Penguins are 8-1-1 over their last 10 games and have won three straight heading into a home-and-home series with the Sabres. They're also eager to have Letang's familiar No. 58 back in the lineup, but only when he's ready.

“He’s been here for a long time and his experience and everything that he brings on and off the ice, the way he competes (is important),” Penguins captain Sidney Crosby said. "But I think in the (locker) room, (he has) poise and (he's) somebody who’s been around a long time and whose experience you feel when he’s around.”