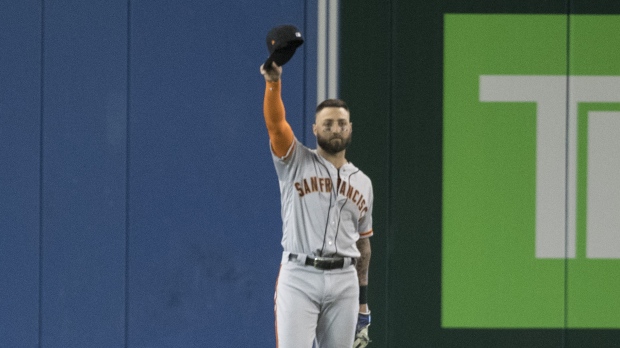 San Francisco Giants Kevin Pillar formerly with the Blue Jays acknowledges fans as he walks out to his centre field position in the first inning of their Interleague MLB baseball game in Toronto Tuesday April 23, 2019. THE CANADIAN PRESS/Fred Thornhill

TORONTO -- Kevin Pillar wasn't sure how he'd feel stepping onto the Rogers Centre turf in a different uniform for the first time.

"I'm still undecided," the former Blue Jay said hours before Tuesday's game, his first in Toronto as a member of the visiting San Francisco Giants. "Obviously I'm excited to be back here, a place I was a big fan of and a place I really enjoyed playing in.

"I was very open and honest about wanting to be here for a long time so I'm definitely excited to be back. I'm sure once the game starts there will be a lot of emotions."

Pillar was traded from the Blue Jays to San Francisco on April 2, ending a tenure in Toronto that began when the team drafted him in the 32nd round in 2011.

The 30-year-old centre-fielder was emotional when speaking to media the day of the trade. Sitting in the visiting dugout three weeks later, Pillar calmly reflected on his time in the city and its brisk ending.

"It's definitely weird. I was here seven years and never really ventured into this dugout," he said. "I never really saw myself sitting in this dugout, coming out of this clubhouse, so yeah, it's weird. ... But I am happy. If it had to happen, going to the West Coast was kind of a blessing."

Pillar, a California native, is closer to his own family and his wife's parents in San Francisco and said he was comforted by the fact that his toddler daughter would get to see her grandparents, aunts and uncles more frequently.

He's also off to a hotter start to his Giants career than he was to begin the season in Toronto. Coming into Tuesday, Pillar was batting .226 with four homers and 13 runs batted over 18 games. He had one hit and three strikeouts in five games to start the year in Toronto.

Pillar said moving to San Francisco -- and playing in the National League for the first time -- was an adjustment and credited former Tampa Bay Rays third baseman Evan Longoria, now also with the Giants, for taking him under his wing when he first arrived.

"I think the biggest adjustment was playing in a different league," he said. "I'm facing pitchers and players that I very seldomly got a chance to play against so I'm learning these pitchers and learning how to position myself defensively against hitters that I never really played before."

Pillar, who helped lead the Blue Jays to back-to-back post-season appearances in 2015 and 2016, described those playoff memories as his most cherished in a Toronto uniform.

And he was pleased with having a hand in the rejuvenation of baseball in Canada as a result of those post-season runs.

"Seeing the impact the success that the team in 2015 and 2016 had on the youth movement of baseball across Canada is what I'm going to be most proud of," he said.

Days after the trade, Pillar wrote a lengthy, heartfelt message to Toronto fans and his Blue Jays teammates and staff on Instagram. While the move caught him by surprise, he maintained there were no hard feelings between himself and the Blue Jays brass.

Instead, he hoped this week's two-game series would provide him with the closure that he was missing after his swift departure.

Pillar got his chance to do that in the bottom of the first inning following a video tribute to him on the centre-field scoreboard. Pillar watched the video from the field, receiving a standing ovation as it played, and tipped his cap to fans when it was over.

Pillar also received a rousing ovation when the Giants' starting lineup was announced moments before first pitch, and another during his first at bat in the second inning. The Blue Jays honoured him once more by playing Bruno Mars' "That's What I Like," one of the walk-up songs he used while in Toronto, and Pillar responded with an RBI single to bring in San Francisco's first run.