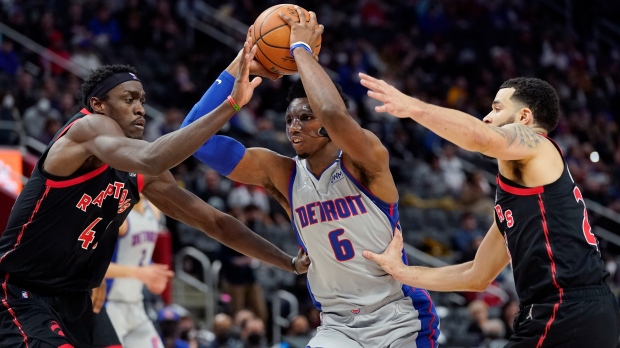 Josh Jackson had 13 points off the bench as the Pistons held Toronto to 32.2% shooting. With three starters spending much of the night in foul trouble, Lyles and Jackson came off the bench to play an important role in the win.

Fred VanVleet had 24 points and 10 assists for Toronto, but shot 6 for 21 from the floor. Pascal Siakam added 23 points and 11 rebounds for the Raptors, who have lost two straight after winning six in a row.

Detroit built a 56-43 halftime lead - its largest of the season - by holding the Raptors to 28.6% shooting, including 2 for 9 for VanVleet. The Pistons also had a 22-7 edge in bench points for the half, including 15 from Lyles.

Detroit extended the lead to as many as 18, but had several key players in foul trouble. The Raptors got within 69-60, but their continued offensive struggles meant they trailed 83-66 at the end of the third.

Jackson started the fourth with a 3-pointer, giving the Pistons their first 20-point lead of the season, but VanVleet's 3-pointer made it 91-83 with 3:39 to play. Cunningham put the margin back to 11 with a 3-pointer with 2:41 left, and Detroit clinched the game from the free throw line.

Raptors: Toronto was starting a five-game road trip and a stretch of eight of 10 games away from home. ... VanVleet came into the game having made at least four 3-pointers in a franchise-record nine straight games, the longest streak in the NBA this season. He missed eight of his first 11 attempts, but extended the record with a 3-pointer with 7:06 to play.

Pistons: Detroit has won five of its last eight, but all three losses have been by at least 29 points, including a 133-87 defeat by the Chicago Bulls on Tuesday.

Pistons: Host the Phoenix Suns on Sunday in a game originally scheduled for Jan. 12.