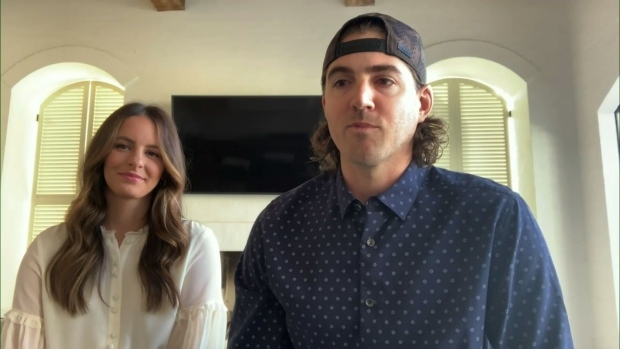 Kevin Gausman is seen in this undated photo.

Gausman's first trip to the mound in the big leagues was back on May 23, 2013 in Toronto, when he got the start for the Baltimore Orioles against an imposing Blue Jays lineup that boasted twin long-ball threats in Jose Bautista and Edwin Encarnacion.

“I think I did everything you could possibly do in that one game,” Gausman said of the game, which Toronto won 12-6. “I hit a guy, walked a guy, struck out a guy, gave up a home run.

“I even think I balked.”

Gausman is hoping to end his career in the same place as it started, this time as a member of the home team. The 2021 all-star and the Blue Jays finalized a five-year, US$110-million contract on Wednesday.

“I've been a huge fan of (Toronto's) fan base from afar,” Gausman told reporters Wednesday. “I've seen Rogers Centre at full capacity, and when the team is electric, the entire city is vibrant and behind the team.

Gausman was 14-6 with a 2.81 earned-run average and 227 strikeouts in 192 innings for San Francisco last season, numbers that earned him his first all-star nod.

The Giants had a monstrous regular season in 2021, finishing with an MLB-high 107 wins. But their playoff fate was unkind, as the Giants had to face the archrival Los Angeles Dodgers, winners of 106 games, in the National League Division Series.

“It took them scoring a run in the ninth inning, and they had to bring in Max Scherzer to shut the door for them,” Gausman said. “It really took everything out of them to beat us, and for us that was the World Series.”

Gausman, however, says he has no thoughts of unfinished business from last season and as he joins a team built to win now. Toronto had 91 wins last season - three more than the World Series champion Atlanta Braves - but still finished fourth in the ultracompetitive American League East.

Had a couple of breaks gone their way on the last day of the regular season, Toronto would have been in a tiebreaker with a chance to move on to an American League Division Series.

“There's a lot of youth here, a lot of guys who are going to be under team control for a long time,” Gausman said. “And a very talented group too. I felt out of all the other teams, this was the best place to go and win now.”

The 30-year-old Gausman will be counted on to provide star power to the Blue Jays' starting five after reigning American League Cy Young winner Robbie Ray left Toronto for Seattle in free agency. Ray's $115-million, five-year deal with the Mariners was finalized Wednesday.

Toronto will still be well-armed going into 2022, with Gausman joining a rotation that includes Hyun-jin Ryu, Jose Berrios and impressive sophomore Alek Manoah.

“The impact that pitchers like Kevin can have on an organization beyond the scope of winning when they're on the mound is massive,” Atkins said. “It will be massive for the development of Alek Manoah and for Nate Pearson and many others.”

He has a 64-72 record and 4.02 ERA in his career with Baltimore, Atlanta and San Francisco.

The native of Moca, Dominican Republic, has a 2.60 ERA in 241 appearances over seven Major League seasons.