Polansky and Andreescu advance in qualifying while Auger-Aliassime falls 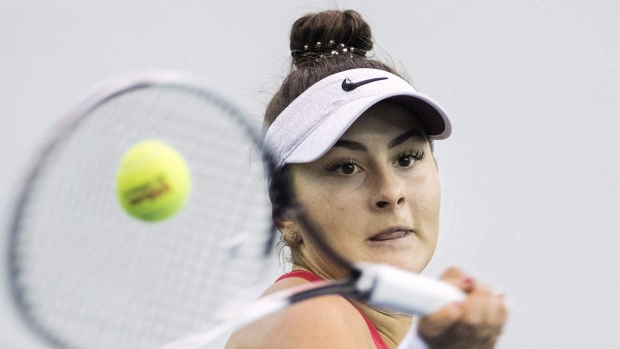 Bianca Andreescu of Canada returns to Lesia Tsurenko of Ukraine during their Fed Cup tennis match in Montreal, Saturday, April 21, 2018. Andreescu advanced to the second round of Australian Open qualifiers on Wednesday when her opponent Katie Swan retired from their first-round match. THE CANADIAN PRESS/Graham Hughes

MELBOURNE, Australia - Peter Polansky and Bianca Andreescu advanced to the third round of the Australian Open's qualifying draw on Thursday while fellow Canadian Felix Auger-Aliassime was eliminated.

Auger-Aliassime, from Montreal, dropped a 7-6 (4), 6-3 decision to American Christopher Eubanks.

Polansky can advance to the main draw with a victory over Australia's Thanasi Kokkinakis in the third round.

The 118th-ranked Canadian reached all four Grand Slam main draws last season as a lucky loser. That's the term for someone who falls in the final stage of qualifying but is randomly selected to play in the main draw if a spot opens up because of a withdrawal.

Andreescu, the fourth seed in qualifying, faced only a single break point over the course of her match. She hit 21 winners to just 17 unforced errors.